YOU'RE READING PICS: The new illustrated version of Harry Potter will give you life

PICS: The new illustrated version of Harry Potter will give you life And how did he go about imagining Hogwarts?

"The preparatory stage, visualising the ‘architecture’ of Hogwarts, took a huge amount of time. I drew a floor plan of what I imagined Hogwarts was like, referring across all seven books. But when I started stacking different floors on top of each other, I found it difficult to understand how they fitted together. 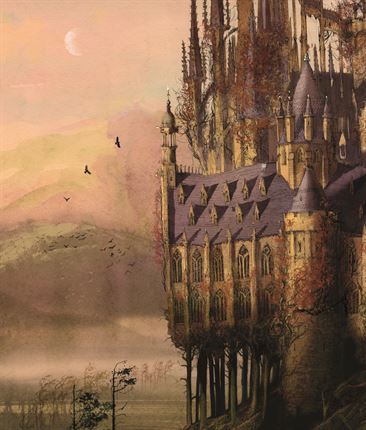 “So the only way I could work out how to draw it was to build a model of it.  It’s the same thing I did as a child – building things in Lego so I could then draw them. So I made quick models out of paper and Plasticine, and used these to draw from. Models are great also to work out the lighting and how the buildings relate to each other.” And so the opportunity to approach Harry Potter in the same way was incredibly exciting and enjoyable. The styles and medium used throughout the book will delight readers in their variety. “Basically it’s me trying to find a style – but I kept changing my mind. Much of the artwork is in watercolour, and I left the ragged edges on the illustrations. My designer said they liked that and wanted to leave those on, and also use ink splodges to add to the page designs. 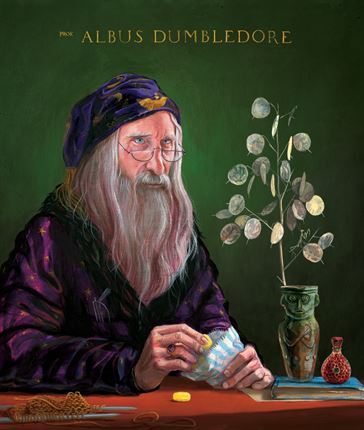 “There are also some portraits done in a Hans Holbein style, because one day I really wanted to do some oil painting. So I decided to do oil portraits of Professors Dumbledore and McGonagall. And Potter fans will immerse themselves in details in the illustrations.  “Well, the detail is a bit of a safety blanket for me because I find spontaneous images really hard, whereas detailed stuff is easier for me to control. Also, I grew up on Richard Scarry’s books and loved all the detail and I think children like looking for details too. And to be given the freedom to add his own details to Harry’s world must have been a Potter fan’s dream come true.  “Yes that was amazing. I was allowed to create shops on Diagon Alley and I’ve shown pages from field guides about trolls and dragon eggs. I really like those illustrations because they are outside the story and they are something that people won’t be expecting when they open the book."

The Magic’s all in the detail. Just ask Jim Kay, the artist behind the first ever illustrated edition of Harry Potter and the Philosopher’s Stone.

Interview and words by Helen Boyle and published with permission from Bloomsbury UK and Jonathan Ball publishers.

“So I got this phone call from my agent,” illustrator Jim Kay tells me, “and she said, ‘Are you sitting down? They want you to illustrate Harry Potter.’ As a big fan of the books and the films, Kay explains, “It was an incredible opportunity to design Harry’s world from the bottom up.”

“Yes, definitely. Everyone has an opinion on Harry Potter and that’s why it’s great, but that’s also why it’s challenging. But I’m not complaining, it’s an amazing commission.”

And Jim Kay likes to challenge himself. “My old art teacher used to say you have to keep testing yourself, don’t get comfortable. And I knew Harry Potter would be difficult for me: because it is children, because of the scale of it and because it’s fantasy. I probably think of myself more as a printmaker, expressing things through landscapes, but with Harry Potter I had to express emotions through characters.

“The hardest thing was the casting – I had to find my own Harry, Ron and Hermione. I’ve never really drawn children, so I needed actual references, especially as the kids grow up through the books. So my agent and I had to find children to cast as my characters.”