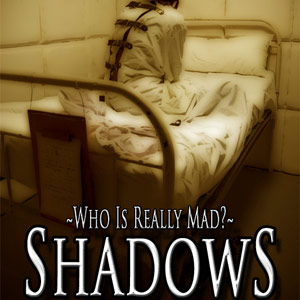 Dark, twisted and creepy, Shadows will take you out of your comfort zone and keep you glued to the pages of the book, regardless of whether or not you want to.
Shadows by Joan De La Haye
After losing her father to suicide, Sarah finds herself on the brink of losing her sanity. Haunted by the ghosts of her family's pasts, she finds herself in a new kind of hell when she starts experiencing a series of graphic, violent and bloody hallucinations.

As if that wasn’t bad enough, the hallucinations also bring about a new form of torment in the form of a demon that refuses to leave her side.
.
Of course, Jack, the demon responsible for both her father's suicide and her bloody hallucinations uses this to his advantage as he continues to make it his business to torment the living daylights out of her.

Unfortunately for him, he doesn't count on the fact that, unlike her father, Sarah simply refuses to kill herself.

My thoughts:
I am not a big fan of horror. Nevertheless, when I posted a tweet about looking for books that would take me out of my comfort zone, Joan de La Haye, author of Shadows, offered to send me a copy of her book. No one was also more surprised than me when I actually ended up really enjoying this book.

For me, the mark of a really good read (regardless of genre) is when you find yourself continuing a story even though the characters don’t endear themselves to you.

The characters that Joan creates are probably amongst the most disturbed characters I’ve ever been introduced to.  They range between being clingy and needy to being downright warped, ruthless and vengeful.

And I’m not even talking about the demon (oh, we’ll get to him later, don’t you worry).

We meet Sarah when she’s at her most fragile. She’s just lost her father and is in desperate need of any kind of distraction that will help lessen the pain. Naturally she turns to her boyfriend Kevin, who as she soon discovers, is far from being someone who is worth her time or attention.

What’s interesting about this is that his story forms another interesting part of the novel which introduces his sister Carol and his lover Denise (who also happens to be involved with Carol). These characters are broken, twisted and damaged characters who are haunted by shadows of their pasts, misguided grievances and are poisoned by hate.

These are also characters that are altogether unlikeable.

As the story progresses, a shocking and incestuous plot unfolds that quickly spirals out of control and leads to events that no one could have predicted.

The presence of the demon Jack, was definitely the focus and highlight of the story for me. He is the character born out of the deepest and darkest nightmare realm and the one you wouldn’t wish upon your family, friends or your enemies.

He is the dark, demented, cruel and taunting demon who haunts Sarah day and night - and the things he does is nothing short of bloody, violent and horrific.

Yet, for all of this, at some point, in spite of what he does, you as a reader can’t help but warm to his character.

Is it even possible to change your mind about an evil creature who has done nothing but inflicted physical and psychological damage on an already fragile person’s mind?

It is with this book.

For all the stark, crispness of her writing, Joan de la Haye manages to make you believe that the demon in some ways has more redemptive qualities than the humans in this story. The development in Jack’s character is definitely something unexpected and leaves you questioning who the real villains are in this story.

Joan has created a character who is definitely no hero, but who makes you see beyond black and white and reflect on just how cruel humans can be to one another.

And this is what made the novel worth the read for me. This book wasn’t simply just a darkly, entertaining horror read.

It was more than that. It was a story written with substance and profound insight into the darker nature of the human psyche.

If you’re a fan of horror with substance, then I’d definitely recommend Shadows. It has the creep and gore factor, twisted characters and is fully immersed in darkness. All the right kind of ingredients for a horror read if you ask me.

Plus, you have to meet Jack. You’ll like him. I promise.

Read this book? Tell us what you thought of it in the comment box below.