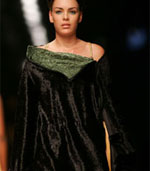 Biography
Thula Sindi always had a great interest in fine art, photography and fashion. His high school years were spent at art school where he imagined he would pursue a career as a painter or photographer.

However, his interest in fashion grew and upon finishing school he studied fashion where he learnt to sew and make patterns very quickly.

During this time he designed garments which he sold to pay for part of his fees and in addition created costumes for his filmmaker cousin's movies. In first year he was a finalist in the Nederburg Young Designers Competition and in third year, a finalist in the Turfontein Summer Cup Design Competition.

Thula's final range for the LISOF year-end show attracted the attention of Vlisco who invited him to join the company as a designer upon graduating. He has shown at Sanlam SA Fashion Week ever since his first collection in 2005.

Inspiration
He believes that women in South Africa are amidst a metamorphosis and finds their strength both exciting and inspiring.

In his words, Thula describes this change as theatrical, that the first act sees our exit from under the cloud of South African conservatism and that the second act will produce both great fashion and daring women to wear it.

He is motivated to design by the bravery of those around him who take risks and strive to live their dreams everyday. Thula also has a great interest in film and literature.