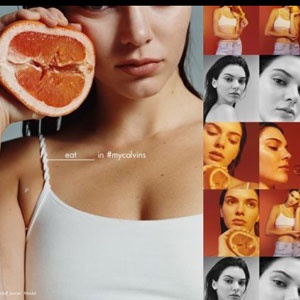 Known for being a fan of skin, cult classic clothing brand Calvin Klein has out-fleshed even themselves. In a bold move, its Spring 2016 Global fashion campaign known as #mycalvins is sexier than ever before and shows even more Not Safe For Work (NSFW) campaign images.

Kendall Jenner is one of the models featured in the campaign. Pictured suggestively squeezing a grapefruit in one shot, while licking an ice lolly in another, Jenner makes eating look hotter than extra spicy Sriracha sauce on an empty stomach. As Fashionista says, it is indeed very apt that the campaign is called "Erotica".

The shots, taken by photographer Harley Weir, show models in various, lets call it, moods. Kicking it, flashing, eating and reacting in their Calvins, the pictures are unapologetically sexy, seductive and powerful.

But the question remains: will this campaign only live digitally? Because many are questioning whether this can live on a city billboard.

See all the shots here.