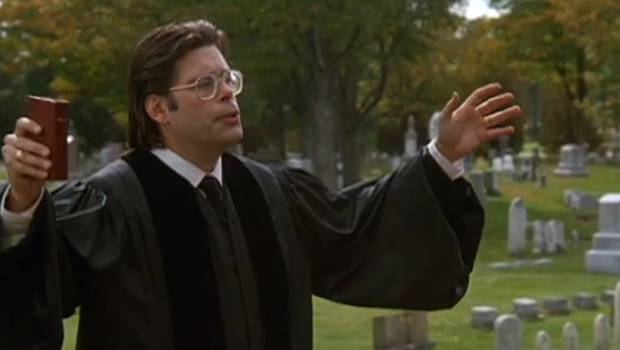 Stephen King makes a cameo appearance in the movie adaption of his novel, Pet Sematary. Credit: Youtube
Writers who showed their tacit approval of their film or tv interpretations by actually appearing in them.

They may not always have control over the casting choices or changes made in their movies, but did you know that there are a surprising number of authors who get to make cameo appearances in the TV or movie adaptations of the books – be it standalones or series?

Here’s a list of movies or tv series that will have you hitting that rewind button to catch those unexpected appearances from authors of books you’ve read and loved:

Margaret Atwood in The Handmaid’s Tale

One of TV’s most compelling and terrifying shows, The Handmaid’s Tale has been keeping us glued to the screens since it first hit, but did you know that in the pilot episode, author Margaret Atwood makes an appearance as one of the brutal aunts who slaps Elizabeth Moss’s character?

Is it just us or does it look like Margaret's enjoying her cameo a little too much?

Stephanie Meyer in The Twilight franchise

The bestselling author of Twilight not only made appearances in the first movie as a woman sitting in a coffee shop, but she also makes shows up in Breaking Dawn: Part 1, in which she shows up during the wedding scene as one of the guests waiting to see Bella walk down the aisle.

READ MORE:It's not just us: authors who hated the movie version of their books

King is no stranger to making cameo appearances in his movie or tv series adaptations. His most memorable appearance is without a doubt the one he made in Pet Sematary (yes, it is spelled like that fyi), where he plays the role of a minister.

That’s not all, he also makes an appearance in the TV adaptation of Under the Dome, executively produced and written and adapted by him.

Young Adult author of the bestselling Divergent series, Veronica Roth showed up in the zip-lining scene in the movie adaptation of the first book in her trilogy. Watch the clip above – she’s the very first person to run out onto the rooftop.

A Marvel movie wouldn’t be a Marvel movie if Stan Lee didn’t make an appearance. And boy has he made some phenomenal cameos. From Spiderman, Dead Pool and Iron Man, to Thor, Lee’s cameos have become a thing of legend.

Our favourite though?  Without a doubt his appearance in Thor.