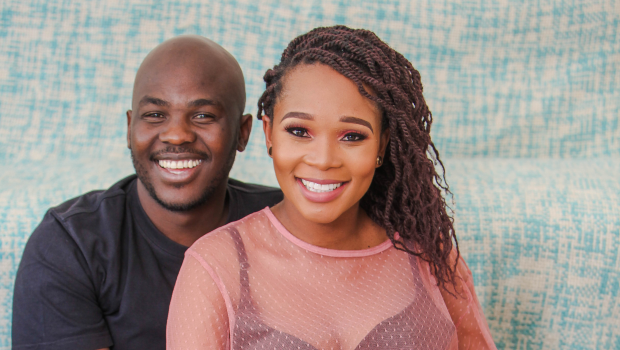 Innocent Sadiki who has become quite well-known for her popular role on Skeem Saam as Sthoko, recently welcomed a beautiful baby girl with her husband Pastor Phindulo Sadiki.

The couple who now have their second child together have also just moved into their new home and they’re in the process of renovating it so it will be perfect for their growing family.

Although the house is quite chaotic right now, the new baby’s room is ready.

Having another baby is a blessing, said the 30 year-old actress but she does wish she’d tried earlier so the gap between her firstborn, Emma Muelekanyi, and her second wasn’t so big.

“I’ve forgotten almost everything I need to know because we waited so long to have another baby,” she says, laughing.

“But I wanted to have another one by 30, so I’m not too late. This pregnancy was so different though. Yho , this child! I’ve never been this big before – she was already weighing 3,4kg’s before she was even born.”

“I was a vegetarian for the first four months because the smell of meat just put me off completely – especially chicken. I was like, ‘How do people eat this?’” Innocent recalls.

She proudly shows us the baby’s nursery. It’s done in soft browns and white with a carpet so thick it swallows up your feet. The baby’s cot is oval-shaped with a white mosquito net covering it.

Little Emma points to it and says, “That’s where the baby sleeps, see?” Innocent’s been busy – overseeing the home renovations, going to baby showers, studying (she’s doing her master’s in acting and drama at Afda) and keeping her daughter entertained – but she still manages to focus on her online show, My Baby Bump, with her twin sister, Millicent Mashile.

The show is produced and directed by Innocent and her media personality twin. Innocent is also the presenter and talks about everything related to pregnancy – such as having sex while you’re expecting, when to announce you’re going to become a mom and misconceptions about pregnancy.

Her husband was amazing throughout the pregnancy, she says. “Shame, he was so patient and made me so happy. He’s a pastor and owns a production company called The Ishe Group, but he’s also always making sure I’m well and happy. My daughter is the same.”

Phindulo is a bubbly, talkative man whose love for God, people and dried mango is unmatched, Innocent quips. On cue he offers us all some of his beloved dried mango. He takes a piece and shares how important God is in raising a family and shaping the minds of children.

“That’s how my wife and I are raising our kids. They need to understand the power of God and see the love of God in the way their parents interact with each other,” Phindulo says. The couple met at church when Innocent was a teenager.

“My sister and I were just starting out in the industry, and he knew the right people and was willing to help us. Over time he and I got closer and eventually started dating. “When we got married there were over a thousand people at our wedding and I only knew about 10 of them – the rest were his friends and family,” Innocent says.

The two were married in 2010 at Phindulo’s home in Venda and Innocent couldn’t be happier to be part of his family.

“I didn’t know a word of Tshivenda when we got married, but I took a decision to actively learn the language because it’s part of my husband’s culture and I want my children to know it – I’m raising young Tshivenda women and I want them to be proud. So I address my daughter and my husband in his language, although he responds in English,” she laughs.

She’s given both her daughters Tshivenda middle names. Her new baby named Ntombana Mukonanyi. Emma and Ntombana’s first names are a dedication to Innocent’s mom, who died when the twins were four.

But Phindulo’s family aren’t too happy about little Ntombana’s Tshivenda name as it means “mediator” and they feel it alludes to there not being peace in the Sadiki family.

“But that’s not the context behind the name. First, it rhymes with my first daughter’s name, and I just love what it means. It sort of gives her the purpose to bring peace wherever she goes. “But they’ll be fine with it eventually because it’s not changing.”

Innocent plays Sthoko in SABC1’s Skeem Saam but she’s nothing like her character, she says.

“Sthoko is the calm one in the Seakamela family, she’s the one who makes sense of things and thinks before acting – and I’m nothing like that. I’m very fast and active,” Innocent says, laughing.

Her character is going through a lot. Sthoko is married to an abusive man, Dennis (played by Clevy Sekgala), and has gone through a lot of physical and emotional trauma at his hands.

“Playing Sthoko has been both rewarding and draining as she’s been through so much – things I’ve never gone through. I’ve never been abused but I’ve seen people close to me in similar situations,” she shares.

“A friend of mine was in a very abusive marriage. She was beaten and abused emotionally. And what that does is change the person completely – my friend was talkative and bubbly, full of jokes and stuff.

At some point she said to us, ‘If I die, just know that my husband is responsible’, and we didn’t really believe her because she was always making jokes. That all changed one day.

He went to her workplace and threatened to kill her because he suspected her of cheating due to all the travelling she had to do for work. That’s when we knew this was real. She eventually left him but she’s changed – she’s no longer the happy person she was. I don’t recognise her anymore.”

Yet she can’t imagine what Sthoko is going through ever happening to her. “Packing my bags and leaving my house – I can’t picture it, I just can’t. But you know what, it happens – and once it does it’s an acceptance of being a single mom, a victim of abuse who chose to leave instead of staying in that toxic environment.”

She realises she’s lucky with her choice of husband. “He’s my friend, which makes him such a wonderful husband and father to our children. We’re so different but we’re such a good team and we’re raising our children to see love and friendship at home.”