YOU'RE READING Viola Davis: “We’ve been fed lies about women” Credit: Getty Images
The award-winning actress and 5 other powerful female TV stars talk about the way women are portrayed in Hollywood and the power of TV.

Each actress highlights important issues such as women’s sexuality, sexism, equality, and playing into a stereotype. Things we’ve all been exposed to for years and are only now starting to question.

Viola Davis, who became the first African American woman in history to win an Emmy for Outstanding Lead Actress in a Drama Series in 2015, says we’re all “fed a slew of lies” about women on TV. Women of a certain age or size are not seen as sexual or having sexual thoughts, or, as Viola plainly points out “you may not even have a vagina.” 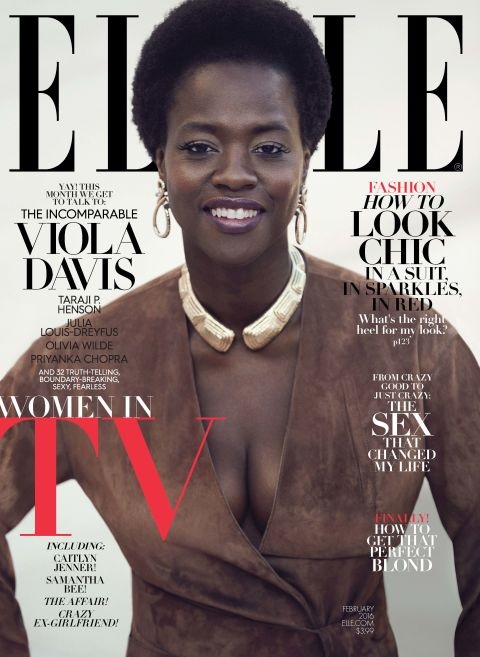 Think about it. How often do you see a fat woman engaged in any sort of sexual situation? Unless they’re the brunt of a joke, that is. Remember how many people had a problem with that scene from Girls where Lena Dunham’s average-shaped character, Hannah, has pretty awesome sex with a handsome man?

What about older women? The women who are supposed to be past their sell by date and no longer think about things like sex or sexual gratification because once you hit 50 all thought of being intimate with another human just stops when you’re a woman. That’s when you get out the cardigans and the knitting needles and wait for your grandchildren to come and sit on your knee, right? Unless, again, when an older woman’s sexuality is used as a comedic tool to gross out the young, male lead. Think There’s Something About Mary and Not Another Teen Movie.

Then there’s the career woman stereotype that says women cannot have both love and “global domination” as actress Priyanka Chopra, who stars in the thriller series Quantico, calls it. What about the sassy black woman stereotype? Taraji P. Henson, who just won a Golden Globe for her role as Cookie in Empire, wants people to know that the woman she plays is not a caricature. Veep star, Julia Louis-Dreyfus, says she’s “thrilled” to be playing a strong, interesting woman in a great TV show and highlights that movies seem to be doing less for women than TV is right now. Saying she will no longer be pulled in by the bullshit that is surely rife in the industry, Olivia Wilde, who will star in a new called Vinyl in February, talks about being sucked in by free designer clothes at 18 and then learning a valuable lesson when it all stopped suddenly. All important lessons that we don’t get to hear about enough because, well, no one ever really talks about them. ELLE certainly got something right with this amazing issue.

Which issues do you want to hear more about on your favourite shows? Tell us and you could win a t-shirt.