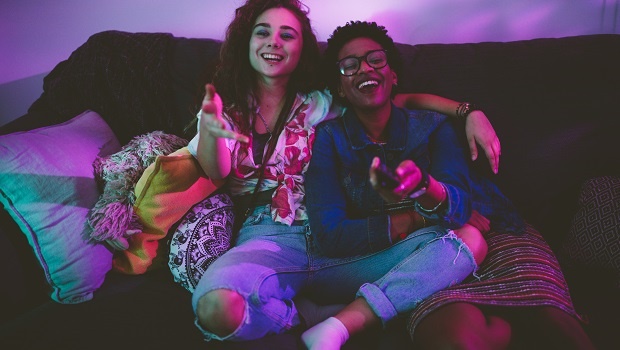 Happy multi-ethnic teenage girls hanging out at house, relaxing on sofa and watching TV together. Credit: iStock
Just one more reason why girls run the world.

A recent study has found that movies that have women in leading roles tend to do better than movies which have male actors in the lead roles. This after the movie Wonder Women broke the box office record with the strongest opening weekend for a movie with a female director in June last year.

READ MORE: This woman’s love story is being adapted to a Christmas movie – celeb love stories we would like to see as movies as well

This year, The Guardian reports on a study which used data from 340 top grossing movies released between 2014 and 2017 to find that movies which had women as the lead actresses did better on the big screen than movies which had men in the leading role.

The study also found that movies which have passed the Bechdel Test had also done a lot better than movies which didn't. The Bechdel test means movies that feature at least two women who are having a conversation about something other than men.

READ MORE: Viola Davis is already one of the greatest actresses of all time - as she redefines what a lead actor is

In light of this momentous achievement for female actresses and women in general, we have compiled a list of our favourite female lead movies for 2018 just so you can witness the magic for yourself.

This movie features an incredible performance by Gaga who plays the role of Ally, a waitress who performs in back alleys. She then meets Jackson who invites her to perform with him. The two form an incredible relationship both on and off stage.

Lisa who is played by Regina is the manager of Double Whammies. he is a nurturing and protective support structure to the waitresses who work with her. As a team they overcome challenges such as deadbeat boyfriends, financial struggles and other problems.

Natalie's character Lena, a biology professor, embarks on a four month long journey into anomalous iridescent electromagnetic field which is called "shimmer". Here she is faced with creatures such as a crocodile which was hybridised with a shark.

This action-packed movie features a group of women who recently became widows and are left with the task to pay back the debts of their husbands in order to protect their families.

READ MORE: Viola Davis is already one of the greatest actresses of all time - as she redefines what a lead actor is

Once her boss is found murdered it forces personal assistant Jill, played by Lola, to find out who the killer is because she becomes the number one suspect.

6. The Hate You Give - Amandla Stenberg

Starr Carter who is played by Amandla Stenberg, is a young girl who lives in two worlds - one that is poverty stricken and another that is set in a mostly white wealthy prep school. As she learns to balance the two worlds, her friend is shot and killed leaving her to learn harsh lessons about life.

A young girl is fastened to a rope and told that she will turn into a goat if she tried to escape. She is then paraded around as a witch and asked to do a number of impossible things.

Rachel meets a wealthy bachelor with whom she falls in love. She is then introduced to the life of the rich and is faced with many challenges such as groupies, a disapproving mother and fitting in with the rich.

This hair raising thriller is about a family who survived an attack by vicious creatures that killed everyone in the town. The secret is to stay quiet. When accidental noise is made, all hell breaks loose as the creatures start to surround the family.

This movie is about a young woman who is hellbent on changing her life after her release from prison. She faces a multitude of challenges as she embarks on a journey to bettering herself.