YOU'RE READING Women are breaking into IT

Women are breaking into IT

By Gender Links: Mwendabai Yeta Mkhize
Women are breaking into IT 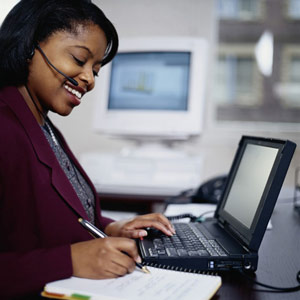 Credit: Getty Images
More and more women are breaking the barrier of 'men's only' jobs and entering the IT industry with full force!

During its meteoric rise over the past few decades, the information technology (IT) industry has been predominately a male territory, controlled and advanced by men. This gender digital divide hinders women and girls’ access to social justice, as well as limits the potential advancement of women in IT industries. This is another barrier preventing women from realising their full potential, which affects not only their personal, but also regional economic growth.

However, like in many other fields, more and more women are now breaking into the IT world, though in many cases this has been a bittersweet victory. Women in IT still face abuse, lack of respect and acknowledgement of their technical skills, or general resistance from male colleagues hesitant about their foray into traditionally male terrain.

Let’s say a woman misspells a name and causes a system breakdown. The mistake will be highlighted as a crisis that will be the talk for quite a while, usually with blame levelled at her gender. On the other hand, a similar error by a man will more likely be corrected and not become the talk of the week. When it comes to sexism and stereotypes, the IT industry is also not much different from other male dominated sectors.

A study presented in 2005 at the World Summit on the Information Society in Tunisia showed that the percentage of females graduating with science and technology education is declining in about a third of the countries for which data is available. The study also shows that the gender divide extends into IT occupations globally, with women accounting for 21% of IT workers in India, 28% in Japan, 16% in Australia, and 35% in the United States. Yet, as a 2002 study in South Africa shows, these figures are also somewhat misleading. The South African study found that 20% of the IT workforce was female, but less than 3% were managers.

The potential employment within the IT industry is so great, it is an obvious choice of careers for both men and women. For example, by 2008, accessibility to mobile phones had grown to 60-70% in Africa.
.
There are many reasons for the influx of women into this field, varying from the desire to gain valuable skills, high remuneration, interest in challenging the boys club, or just a general love of the field – very much the same motivations as their male colleagues. Women and men in IT usually have the very same ambitions.

However, some areas of a woman’s life make balancing the equation more difficult than that of a man. Women still carry the heavy burden of domestic responsibilities. In short, women are usually balancing their family and work responsibilities. They also sometimes face stigma and contradictions of gaining respect, confidence and trust about their chosen profession in their own relationship.

However, not all hope is lost. Women as career seekers, parents, wives and sisters can make progress in the challenging world of IT, as with any other industry. Arrangements such as flexitime, because of the ridiculous long hours that the IT i career comes with, can help facilitate a gender equal industry. It is a dimension that workplaces rarely explore, which forces talented women to leave the industry.

Technology is no different from any other field when it comes to capacity building. Gender must be taken into account when developing any programme, otherwise women may be unintentionally excluded when they have the right skills, zeal and determination.

Like all professionals climbing their career ladder, women must also realise there will be some sacrifices. However, they must also learn to have faith in their own abilities and skills, because there will be plenty of times when no one acknowledges the work that they do. On the other hand, self-confidence is not the same as over-confidence- Someone should not be afraid to ask or say, “I don’t know,” BUT make sure to follow up and so that she knows the next time around.

Men often have advanced knowledge and skill because they have been in the industry for way longer than women have, and therefore mentorship is one very good way of growth. Knowledge alone will help a woman build up most of the respect that people have for her and her abilities and make her environment a pleasant one.

Mwendabai Yeta Mkhize is responsible for IT Systems, Monitoring & Evaluation
Gender Links. This article is part of the GL Opinion and Commentary Service

Do you see yourself breaking into the IT industry? Share your experiences in the box below...