Girls in gaming and Esports – it’s bigger than you think I have been following Sam Wright for quite a while now. The self-confessed geek girl, gamer and technology obsessed founder and editor of Techgirl.co.za, is passionate about providing a platform that caters to women who love gadgets and games on many different levels.

As mentioned on her site, “I’ve freelanced for a few tech publications and during my time writing, reviewing and speaking to other women I’ve realised that we consume technology differently.”

Because of this, her site is not only user friendly, but caters to women, girls and moms who are both new to the scene and those who are looking for the latest news and reviews on the best in technology, gaming and Esports.

We sat down to chat to her about all things fun and geek related. 1.You recently organised The Valkyrie Challenge – an all girl eSports event that saw quite an impressive turnout. Can you tell us a little more about how your love of gaming led to you arranging a gaming tournament aimed at women?

I have this immense passion for South African Esports. I really believe that the way to put SA Esports on the map is to send a local team overseas and watch them dominate.

The problem is the skill gap between the best teams in the world and our local best teams is huge. We struggle with latency issues and ideally need a team overseas competing full time. This is extremely difficult because of the costs involved.

HOWEVER, there has been an increase in female showcase competitions overseas and I truly believe the skill gap isn’t that large.

If we, as the local Esports community, got behind a female team and gave them the support they needed to train as well as pushed for an invite to one of these competitions - we have the talent to win one of those competitions and ultimately push eyeballs to the South African scene and ultimately then get our best teams over there.

More so I believe strongly that there are far more competitive female gamers in SA then we realise. They have just not had a platform to showcase their skill. The Valkyrie Challenge was just my first step in showing off this talent and allowing these ladies the opportunity to be noticed. 2. In your roundup of the event, you mentioned that some of the brands you approached were not particularly sold on the idea. Do you think it’s because there’s a perception that women just aren’t as interested in gaming – particularly competitive gaming – than men are?

I approached a host of big brands to help support this and all of them turned it down. I do believe there is a perception amongst tech and gaming brands in South Africa that gaming fans and competitive gaming fans are mainly white males.

I think they’re wrong and I believe the Valkyrie Challenge proved that. We booked out the venue within 48 hours and had a host of men and women of all ages and colours in attendance. The support online was overwhelming - we trended on social media during the rugby! That speaks multitudes in my opinion.

3.  Why do you think so many people find Esports so addictive?

Esports is like any competitive sport. The players have stories we invest ourselves in and rivalries that feed our interests.

Their skill is inspiring and we can relate more so because we’ve all played a video game before. Esports competitors are our new rugby stars and they are accessible to all of us because they’re online and on our computers every evening.

In Esports everyone is equal because in game it doesn't matter if you’re a man, woman, fat, thin, black, white or pink - you all have an equal opportunity to win. 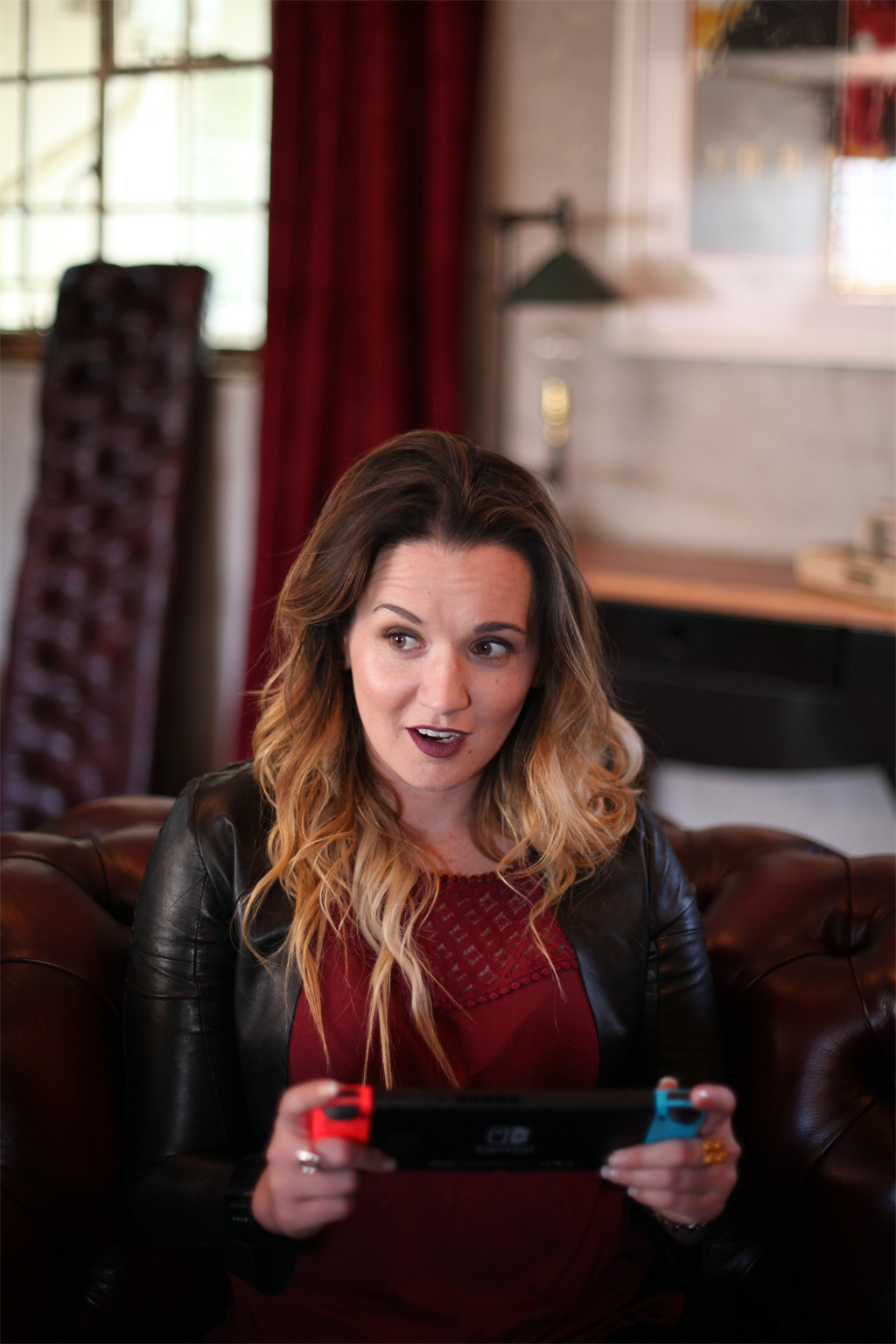 4. Given the success of your Valkyrie Challenge, will you be branching out to hosting the event in other cities besides Johannesburg?

I’m hoping the success of Valkyrie will encourage more corporate sponsors to get behind this initiative and help us set up an online league.

The best part about Esports is that competitors can take part from the comfort of their own living room if they have a decent internet connection.

If we ran an online league anyone in the country could compete. That is the dream! Image credit: A Maze (Check out Sam's post about the A Maze festival here)

5. Who are some of your favourite women gamers and geek girls doing amazing things in South Africa?

Sharon “ShazZ” Waison is my inspiration. She is a female CSGO player (that is an Esports title) who went overseas to play with the then top female team, Team Karma, at the Copenhagen Games. They won the competition.

If I’m not mistaken she was one of the first South African Esports players to compete overseas and actually win a major title.

Unfortunately because of health issues ShazZ had to come back to South Africa where she is on the waiting list for a kidney transplant. But even now, she competes in the top levels in the country and is considered one of the best players.

Not only is her gaming ability inspiring but she is one of the most down to earth and humble women I know. She never lets her health issues weigh her down and continues to constantly be a ray of positivity and support for the local community.

Another South African female gamer who inspires me is Pippa Tshabalala. Pippa was the first person in the industry to give me a “gaming” job when she let me contribute to the now defunct online gaming and geek magazine Spliced (she was the editor).

She led the way for females in this country to enter the gaming scene after she hosted the Verge - the first gaming focused television show South Africa had.

She has always been available to offer support and lend an ear to n00bs (newcomers) to the scene and has great taste in video games too! 6. When I first started gaming, one of the biggest things I believed was that I would need to automatically excel at it in order for me to be considered a gamer. It’s a feeling I still struggle with as I open myself up to the idea of trying new games. What do you think we can do to help dispel this notion that gamers (particularly women) can be gamers regardless of the level they’re playing?

I felt EXACTLY the same. For a long time I’d never play games at launches or in public because I was terrified people would laugh at me. I love video games but I also know I usually suck at them - which is fine because gaming is about having fun over and above everything else.

As a woman in the space I felt I couldn’t be bad because I’d be feeding a stereotype. However, I’ve now come to realise that no matter your gender, no one is automatically brilliant at a new game. The only way to dispel this myth is to just play more games!

If more girls see us playing and having fun, no matter our ability, more will feel comfortable with gaming.

7.  What are the 5 best apps that are on your phone right now?

Twitch App - because I’ve become obsessed with watching Esports and streamers in queues and it works so well.

Stocard - it allows you to put all your loyalty store cards into the app so you don’t need to carry a bunch of plastic around. It has really changed my life.

Hey Jude - this is a personal assistant app on your phone. I abuse it all the time to crank call my friends as opposed to get actual tasks done, but they’re so good at it that I can’t help it.

Snapchat - I know a lot of people say this app is dead but I really do disagree and still love watching Snaps in bed before going to sleep. Splatoon 2 on Nintendo Switch is my go to EVERY TIME. I’m obsessed with this game and have so much fun playing it. I’m also in love with Quake Champions. Early Access passes on Steam are now available but we’re still waiting for official launch dates.

9. Best older games that are worth checking out?

Any fighting games are fun, no matter how old they are. I like a little button bash every so often just to relieve some stress. Injustice 2 is my go to.

10. What are the optimal specs needed for a gaming pc or laptop and which are the best places you’d recommend if you want to get a new pc or an upgrade?

This is completely dependent on the games you want to play, if you want to stream your gameplay and what else you need the hardware to do (sometimes you have to take a break from gaming and do some actual work - YUCK).

My go to is Evetech.co.za - they’re one of South Africa’s biggest gaming hardware online sites and also sponsor my YouTube channel. I always find the staff are really great at finding out what you plan to do and then suggesting the best possible options that don’t break the bank.

11.  The games women play most commonly are:

12. And finally, what role do you think we as women play in South Africa?

I don't think there is a specific role women play in SA. We all identify differently in game and I'm not sure our gender or location alters that to be honest. Which is why gaming is such a great space (most of the time).

Are you a gamer? Tell us about some of your favourite games to play.

I am honest ,fun loving, funny, loyal, honest and straight forward. Know what I want in life. I am very positive and social person. Always up for a new adventure and experience!...
Confirm profile