YOU'RE READING An African homestead at one with its Bushveld surroundings

An African homestead at one with its Bushveld surroundings Elza Cooper.
Two city slickers have found peace and created their own “traditional African homestead” in their ecofriendly getaway near the Kruger Park.

Time was the true designer of architect Jaco and businessman Jens Reverchon’s gorgeous getaway ona small farm adjacent to the Kruger National Park. “Initially, I was keen on a very different look,” Jaco explains. “Something more along the lines of a modern five-star bush lodge. But the more we visited the property, the more I doubted the sensitivity of such a design.”

So the Reverchons decided to first experience all the seasons on their new piece of land and then rethink what it was they wanted from their home. “We started with renovations in November 2016 and we’re still busy with the final touches,” says Jaco.

While building a house in the bush is certainly a romantic venture, the location proved to be the couple’s greatest challenge. “Every purchase and alteration required careful planning since the closest sizeable town, Mbombela, is a good two hours’ drive away,” Jaco explains. But this contributed to the design, as the Reverchons decided to incorporate the existing farmhouse into their plans and use materials already on site.

The kitchen and dining room open out onto an outdoor living space. The wall to the left features various niches filled with lanterns. “It’s spectacular at night!” says Jaco. The skylight and large glass doors differentiate the newly built stoep (built from old bricks) from the original building. The skylight doubles as a gutter system. “When it rains, it feels as if you are standing under a waterfall,” Jaco says. “Magical!” 1. What used to be the lapa is now the living room; it’s still open on three sides. Slate sourced from the area was used for the floor; it’s sealed with a liquid wax from Columbus Cleaning Solutions, a non-slip application useful on exterior cement floors. For the Reverchons, the open lounge is a way to connect with the environment.

The armchair is covered in a Laura Ashley design from Hertex. “The blue is rich and contrasts well with the earthy colours in the lounge,” Jens says. The handcrafted wooden bench was bought in Zimbabwe, while the blanket with blue squares is from Mali.

2. The stairs link the open lounge area with the kitchen and dining room. “The walls once formed a dilapidated storeroom,” Jens says. “We found the two wooden wild dogs while travelling around Zimbabwe some years ago. They are quite at home here. Being on the edge of the Kruger Park, Jaco and Jens wanted their home to reflect the majesty of their wild surroundings.“We felt that the farmhouse drew attention to all the wrong areas so we decided to revamp the kitchen, dining and living areas.” A dilapidated outbuilding served as a foundation for combining all these rooms into one seamless open-plan area.

“We tried to retain as much of the old building as possible,” Jaco says. “We also committed to reusing materials; utilising local resources, labour and craftsmen; and incorporating the rubble on site into the new building work. In this way, we aimed to give back to the community and limit our impact on our surroundings.”

Along the way, Jaco met a local builder who had helped to build the original farmhouse 40 years ago. “I invited him to be part of the renovation process, as he had skills that would be difficult for me to obtain. Nelson Ndlovu and his son were, for the first time ever, part of constructing a designer house with an architect who was responsible for mixing the cement! Skills were traded and ideas were shared, often under the shade of a tree, while we developed the layout together.”

In the end, they created a collection of “compartments” and separate buildings similar to a traditional African homestead.

The bridge as it is referred to, connects the living room to the kitchen and dining room, via the stairwell. Some of the original trusses were used to rebuild the lapa roof; the thatch structure was designed by Jaco. “It looks a bit like a beehive and it gets a lot of attention from visitors,” he says. The rugs, made by Zimbabwean artisan Paul Madzinga, were based on designs by Jaco and Jens.

We wanted to create a low-impact dwelling that will continue to evolve over time, becoming increasingly independent and contributing to a less intrusive lifestyle. – Jaco The two Wassily chairs are old family heirlooms. “Their classical design is a perfect fit anywhere,” says Jens. “The round table consists of an iron base manufactured to hold the light of an old lighthouse. We covered it with a round glass top. It looks amazing if you fill what used to be the light with water and flowers.” Jens brought the Persian silk rug with him when he first moved to Cape Town from Europe. “But I love the lamp I inherited from my grandmother most of all. It’s a French Art Deco piece from around 1905; it survived both World Wars and has now found a new home in the African bush.” Jaco, Jens and Filou the Great Dane enjoy spending time in the kitchen. The design for the shelving unit was inspired by a visit to Kenya. “We wanted something simple and effective. I made it myself and Jens helped with bending the metal, which consisted of leftover structural poles from the construction.

The merits of teamwork

As anyone who has ever been involved with a building project will know, the total cost always tends to exceed the budget. Even architects make this mistake, says Jaco with a laugh. “The budget was naively set at R80 000 – which was all we could scrape together after buying the property.” Before long they had reached R230 000...

“But it was a lovely, slow process often interrupted by a curious elephant or a lion who decided to take refuge from the morning sun under the tree where the cement was being mixed.”

Jaco says the impressive end result is a testament to teamwork. “Nelson and his son were mostly in charge of the brickwork and thatch.” Jens, who has never attempted a trade before, took it upon himself to fix any small cracks and repaint the entire exterior and interior of the house. “It was remarkable how quickly he became confident and mastered the skills.”

Jaco, armed with plenty of experience in the building industry, was responsible for the layout. He also did all the welding, glazed the kitchen skylight and saw to the plumbing, roofing, landscaping and electrical installations. “I can safely say that while sculpting this building, we easily packed three months’ worth of gym visits into five weeks!” 1. The outdoor terrace that extends from the dining room came about as a way of disposing of the huge amount of rubble on the site.

2. The baskets hanging from the trees are from “next to the road” in Ohrigstad. “We spray-painted one and really liked the effect. They are meant for birds – but no luck yet," says Jens.

3. The spacious entrance used to be a bedroom. The mirrors against the wall moved with the couple; Jaco made the lamp and a server from an old roof beam. 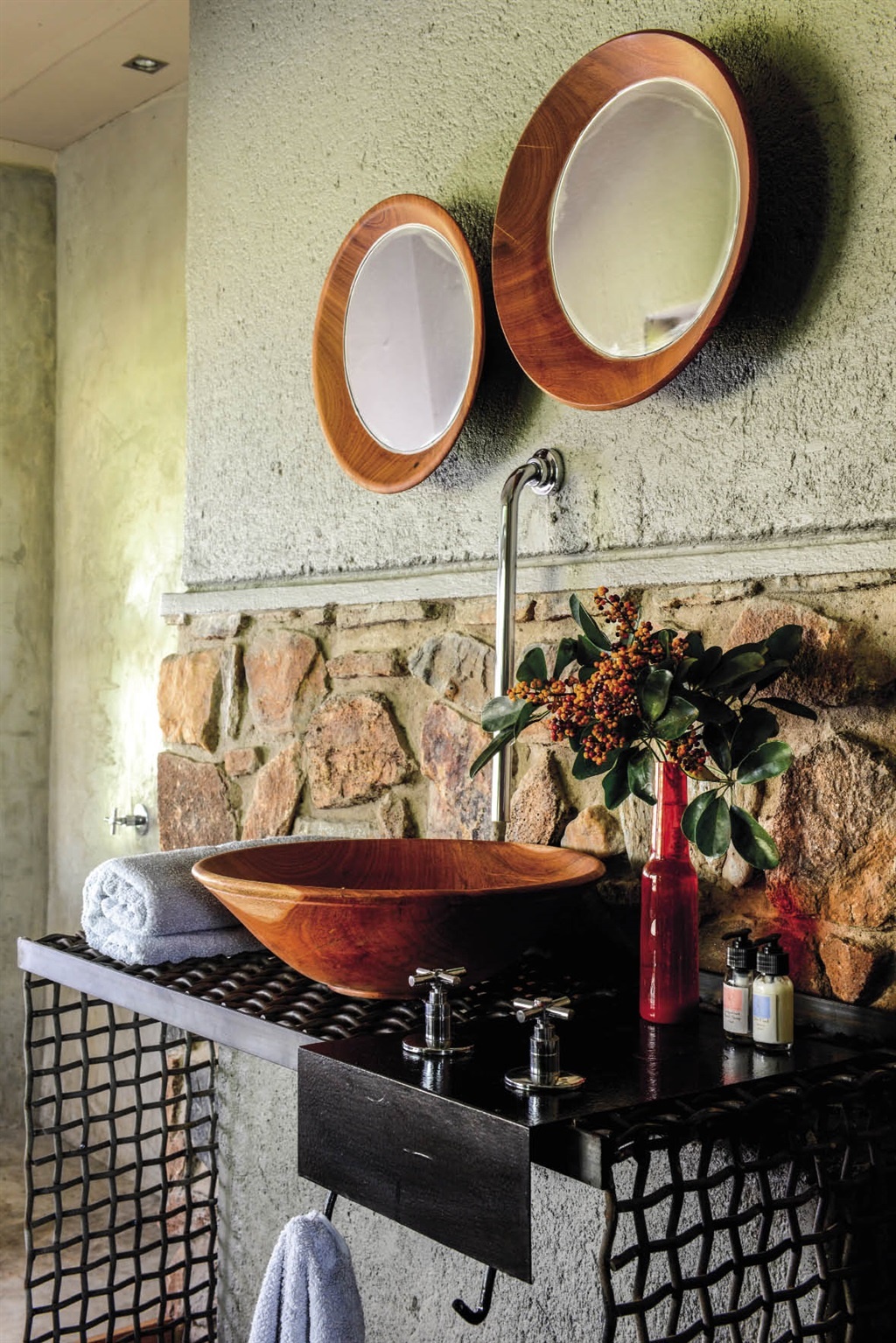 1. All the bedrooms are equipped with mosquito nets. The stone plinth next to the bed was part of the original building; Jaco made the lamp.

2. After serving as a ramp for wheelbarrows,the mesh screen was repurposed as a vanity in the main bedroom’s en-suite bathroom. A metal plate houses the taps and accommodates hooks for hand towels; the basin and mirrors are timber bowls that were bought locally. In touch with the senses

One of the great pleasures of this property is that you begin to focus on very different things, says Jens: “It’s all about recycling, living green, conservation, the outdoors and the thrill of being visited by the Big Five on your own property. We can actually just sit on the terrace and they visit us!”

Jens also believes that this ‘refocusing’ sharpens the senses. “You hear and see better, you smell better – it feels far away from the pollution and noise of the city.

“We love hanging out on the new terrace, experiencing the beautiful sunsets and preparing dinner in our ‘almost open’ kitchen. We have friends over quite often and it’s great to have various different spaces to enjoy. We also appreciate the sense of safety and tranquillity. There is no alarm or armed response and it really liberates you. There are so many things to discover in the bush and we’re permanently inspired to learn more.” One of the advantages of buying a property thatwas first developed four decades ago is the well-established trees that soften the surroundings and buildings.