YOU'RE READING This woman made her own Ebola prevention suit

This woman made her own Ebola prevention suit 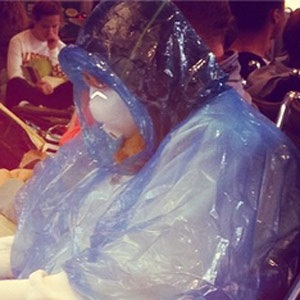 A female passenger was pictured in Washington DC wearing a homemade hazmat suit in what seems like a preventative measure against Ebola.

According to Buzzfeed, a woman at Dulles International Airport, where now deceased US Ebola victim Thomas Eric Duncan had a layover, went all out in a bid not to contract the disease.

A picture of the woman, who was seen wearing a full body plastic gown with hood, mask and gloves, went viral after it was tweeted and then picked up by various news outlets.

According to News.com.au, Dulles is one of four airports in the US which are now screening for Ebola along with airports in Chicago, Atlanta, and Newark, New Jersey.

The picture certainly shows how afraid the public, especially in America, are of contracting the disease.

Ebola can be contracted by contact with the blood, body fluids, secretions or organs of an infected person. The incubation period of the virus between exposure and the first symptoms varies from two to 21 days, according to Health24.