How your genes could affect the quality of your marriage Credit: Unsplashed
Does a good marriage depend on having the right genes?

How important is it to consider a romantic partner’s genetic profile before getting married?

It is logical to think that genetic factors may underlie many traits already used by matching sites - like personality and empathy - which many assume could promote initial chemistry and long-term potential in specific couples. So it is perhaps not surprising that there are now websites that combine genetic testing and matchmaking.

But does matching intimate partners on the basis of specific genes have any scientific foundation? Studies have shown that genetically identical twins, raised separately, rate the overall quality of their marriages similarly, suggesting some enduring genetic contribution to marital life. However, the specific genes that are relevant to marriage, and why, remain a mystery.

As such, predicting marital compatibility on the basis of specific combinations of genetic profiles rests on tenuous scientific footing. Currently, researchers are just beginning to identify the genes that may be associated with marital bliss and through what processes.

Why study the effects of genes on marriage?

As a scientist and clinical psychologist, I have a longstanding interest in identifying the factors that contribute to a happy marriage, such as how couples manage conflict. My interest in exploring genetic determinants, however, developed more recently.

Genes are segments of DNA that encode a particular trait. A gene can take on various forms called alleles, and the combination of the two alleles inherited from both parents represent one’s genotype. Differences in genotype correspond to observable differences within that trait across individuals.

Though genes underlie individual differences in a broad range of characteristics believed to be relevant to marriage, I am specifically interested in the oxytocin receptor (OXTR) gene. Oxytocin, sometimes referred to as the “love” hormone, appears to play a significant role in emotional attachment. For example, oxytocin floods a new mother at the birth of a child and it spikes during sex. Therefore, I reasoned that the gene that regulates oxytocin, OXTR, might be a good one to study in the context of marriage, as it is frequently implicated in how we become attached to other humans. Moreover, OXTR has been associated with a range of phenomena linked to human social behavior, including trust and sociability.

Of greatest interest to me is that the OXTR gene has been linked with physiological responses to social support and traits believed to be critical to support processes, like empathy. Considered alongside findings that the quality of social support is a major determinant of overall marital quality, the evidence implied that variations on the OXTR gene could be tethered to later marital quality by influencing how partners support each other. To test this hypothesis, I pulled together a multidisciplinary team of scientists including psychologists with additional expertise in marital research, a geneticist and a neuroendocrinologist specializing in oxytocin.

Together our team recruited 79 different-sex married couples to participate in our study. We then asked each partner to identify an important personal problem – unrelated to the marriage – to discuss with their spouse for 10 minutes.

These discussions were recorded and later coded according to how each partner solicited and provided “positive” support by scoring elements like problem-solving and active listening. Couples responded separately to several questionnaires including a measure of perceived quality of the support they received during the interaction. Each person also provided saliva samples that our team analyzed to determine which two alleles of the OXTR gene each person carried.

Based on prior evidence, we focused our attention on two specific locations on the OXTR gene: rs1042778 and rs4686302. As expected, higher quality social support was associated with marital quality. Also, genetic variation at each OXTR site for both husbands and wives was linked with how partners behaved during the support discussions.

However, individuals did not appear more or less satisfied with the support they received based on differences in the positive skills their partners used during the interaction.

Rather, we found that husbands with two copies of the T allele at a specific location on OXTR (rs1042778) perceived that their partners provided lower quality support. This was regardless of whether his partner’s support skills were strong or weak.

To us, this implied that husbands with the TT genotype had greater difficulty interpreting their respective wife’s behavior as supportive. This is consistent with other findings implicating this same genotype in social-cognitive deficits, as well as autism.

Notably, the husband and wife in couples also reported being less satisfied with their marriage overall, when compared to those with different combinations of alleles. This suggests that couples in which the husband carries two copies of the T allele were worse off, in part, because these men had trouble perceiving their wife’s behavior as supportive – a notion that our statistical analysis ultimately supported. 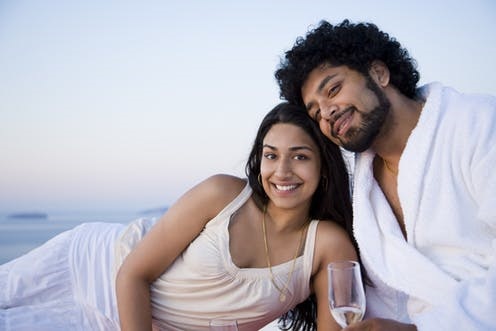 Are you and your partner the ideal genetic match? Tiffany Bryant/Shutterstock.com
The Conversation

Do we have the evidence necessary to start screening potential husbands for specific combinations of genes that seem harmful to marriage?

I would not recommend doing so for a few reasons. Foremost is that genes can influence a broad range of characteristics, which may be detrimental to a marriage in some respects but beneficial in others. Although we found that having two copies of the T allele seems to be a liability in the context of social support, exploratory analyses revealed that this combination appeared to also confer some positive influence on the marriage. The exact mechanism remains unclear, but we speculate that being less sensitive to social nuance may be protective in other areas of marriage by, for example, blunting hostile exchanges during disagreements.

READ MORE: 'I’m dating the funniest, most loving guy but he is broke' – this woman wonders if she should choose financial stability or love

More to the point, assuming that a single gene can make or break a marriage underestimates the complexity of genetics and marriage. It is possible that certain genes may be more or less detrimental depending on the rest of a partner’s genetic profile. However, there is currently no published data on which to rest any type of proposed match. So, ruling out prospective husbands on the basis of variations within or across genes doesn’t make much sense.

Nevertheless, there are still practical implications to our current findings. Researchers have shown that social support from intimate partners can buffer the deleterious effects of stress on mental and physical health. To the extent that particular genotypes impair an individual’s ability to feel supported, that person may be more susceptible to the effects of stress. Thus, screening men for the TT genotype on OXTR could assist in identifying those at risk for stress-related problems. In addition, future research may highlight how to tailor the delivery of social support in ways that can benefit these individuals.

There are also several other potentially relevant locations on OXTR, as well as other genes that may be relevant to relationships. Our study provides a template for approaching the study of marital genetics.

This article is republished from The Conversation under a Creative Commons license. Read the original article.
More about relationhips| marriage| genes