YOU'RE READING Sex tourism in Africa: European women who pay for sex with locals

Having casual sex? Here’s what to do if you start 'catching feelings'

Sex tourism in Africa: European women who pay for sex with locals 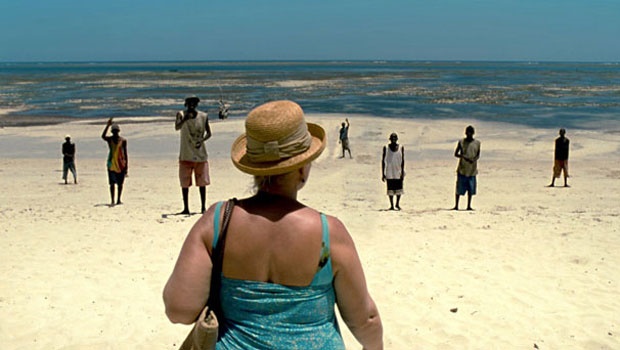 Credit: Youtube
Sexual predators or sad old ladies in search of orgasms and a bit of romance?

Recently, a friend, upon her return from a holiday in Zanzibar, told me that guys referred to as ‘beach boys’ frequented the local beaches selling handmade trinkets and Dhow trips to surrounding islands to tourists walking along the beach. But they are also known to offer sex, almost exclusively to middle-aged white women who go to the island exclusively for that purpose.

With “sex” now not being far from being a checkable option under ‘reason for travel’ on our customs cards upon arrival in another country, this unique form of tourism has now almost become mainstream.

Men seeking sex tourism is a much-publicised phenomenon. Predominantly white European and North American men heading to poor countries like Thailand, Cambodia and Kenya with the main purpose of having sex with local women have been labelled as predators for years.

Not included in the scope of prostitution, sexual tourism is seen as social exchange, rather than an explicit sex-for-money trade. It’s frowned upon by local communities and authorities, but it’s not technically illegal. Simply because it’s nearly impossible to police.

Island ‘romances’ or ‘sexcapades’ is a type of sex tourism that is still very much veiled.

Now, women are increasingly injecting themselves into this world. Turning this trade on its head, they are no longer just bodies being bought, but rather the ones travelling across continents to have sex with the local men. Destination: Africa.

Opting for island ‘romances’ or ‘sexcapades’ with these men, this form of female-driven sex tourism is still very much veiled.

In a 2012 Reuters article on this subject, Jake Grieves-Cook, chairman of the Kenya Tourist Board saidthat female sex tourism is not seen as an evil, but that it’s certainly discouraged by the local community. And in a country like Kenya, with more than 7% HIV/AIDS prevalence, and condoms often not being part of these women’s sex fantasies, sex tourism is becoming an ever more dangerous sport.

Older women, predominantly from Europe and North America, frequent African and Caribbean Basin resorts in the hopes of romance, companionship and sexual encounters. The men they engage with are not under-aged (often the case with men seeking sexual tourism), and are usually consensual sexual relationships with the understanding that goods and money will be exchanged.

The Mail Online notes that these women either travel alone or in groups of friends. They are often divorced and have experienced some sort of heartbreak in past relationships, says Reuters. These women are thought to be affluent. Yet The Mail Online notes that these European women are not necessarily wealthy. In comparison, yes, but many hold down low-paying administrative jobs back home.

In the end you’re left wondering, who’s exploiting whom?

In a brilliant 2012 film, Austrian director Ulrich Seidl gave us a very candid look into the world of sex tourism as he followed a 50-year-old Austrian woman’s sex tourism journey to Kenya in Paradise: Love. The protagonist, Teresa, is overweight. On the white sandy beaches of Mombasa she’s called a Sugar Mama. She’s there to find something. Not necessarily love, but something in between lust and love. But throughout we see that for many of these women the sex is not completely detached.

We see her engage in casual sex, going on “dates” with buff young guys and visiting them at home, spending money left, right and centre. Often on a family member who suddenly comes down with some sort of ailment. The stories are elaborate.

In the end you’re left wondering, who’s exploiting whom?

Soon Teresa realised that sex is but a business. No strings are ever really attached and the sex is, inevitably, empty.

But are these women sex hungry cougars preying on young, impoverished local men or are these mutually beneficial cash-for-services-rendered exchanges between consenting adults?

Middle-aged women actively engaging in sex tourism, hoping to fulfill a need that simply cannot be satisfied back home might be seen as predatory by some, while others simply view this as sad.

Reuters argues that “experts say some thrive on the social status and financial power that comes from taking much poorer, younger lovers.  This is what is sold to tourists companies -- a kind of return to a colonial past, where white women are served, serviced, and pampered by black minions," says Nottinghan University's Davidson.

“Oh! That must be it! These older, rich white women want slaves! I was way off in thinking that they were looking for some companionship or that they might be lonely, and I really missed the mark when I thought some of these cougars just want some good, hot sex.”

Female sex tourism hasn’t received as much attention in the media as male sex tourism, perhaps because it’s seen as harmless. The women have slight financial power, but are not perceived as players with lots of agency. They are middle-aged, usually overweight, conventionally unattractive and therefore are punished in a way that men, no matter their physical appearance or financial status, have never experienced.

By not exploring these relationships, because they are female-driven exchanges, again reiterates the notion that women are not sexual catalysts able to choose how they engage sexually.