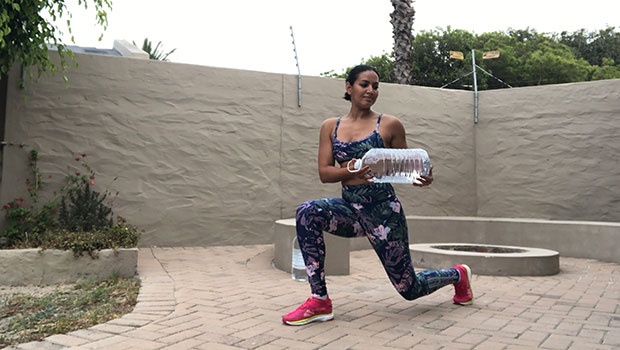 Credit: Supplied.
Got a garage full of stockpiled water bottles? It's time to put them to use...

I’m not generally one to give in to mass panic. During the bird flu epidemic of 2017, I brazenly made frittata.

As the Mother City braced for The Biggest Storm In Thirty Years, I was sipping chilled white wine at the Village Idiot on Loop, waiting for the maelstrom that never came. And just recently I ate a sausage. It was processed.

READ MORE: What's up with all the polony shaming?

100 bottles of water in a trolley…

Did I mention that I was born in Cape Town? So panic is in my blood. Must be. It’s just buried deep, along with the fear-of-using-indicators gene and the willingness to pay twice the price for anything labelled “artisanal”.

I know this, because earlier this year, it briefly surfaced. I first showed symptoms as I was leaving Pick n Pay one Saturday afternoon. A fellow shopper walked past with a trolley piled high with five-litre water bottles.

I shot him a pitying  glance. Then I saw people queueing outside an Oasis water shop with containers so big I could probably have squeezed into them myself, had I been schooled somewhere like Russia or China.

Don’t get me wrong, I pitied those fools as well, but this time it was tinged with mild concern. I bought one 5l bottle of water and put it in the fridge.

READ MORE: 5 Kettlebell Mistakes That Are Screwing With Your Results

Look, I’m no drought-denialist. At this point, I was already doing my bit to save water – rain tanks, buckets, dead garden, swampy pool, grey water in the toilets, all the usual.

But as my family WhatsApp group shared link after doom-filled link and talk radio lined up one drought expert after the next to discuss everything from shower-heads to geology, even unflappable me began to flap. (More guinea fowl than Game of Thrones dragon, but a flappetjie nonetheless.)

And eventually my Capetonian heritage could stay silent no longer. The fever hit. I panic-bought water. Online – we’re still civilised over here. And now, here I am, maneuvering my little hatchback into a garage stacked high with five-litre water bottles, prepped for a Day Zero that’s been pushed out to 2019.

READ MORE: Sculpt Your Whole Body With This One, Simple Piece Of Equipment

The good thing to come out of this drought – there’s always something – is that us Capetonians are going to be so strong. Bring on Super Rugby 2019, baby!

Water is heavy. A five-litre weighs about five kilos – that’s a decent-sized kettlebell. You may not be drinking out of your water bottles anytime this year, but here are 17 exercise moves you can do with them as your weights.

WATCH: 17 Exercises You Can Do With A 5L Water Bottle