YOU'RE READING Crystals and colour 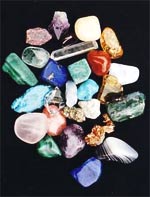 Bet you never thought that crystals and colour can heal your body and emotions right? Well, as I discovered, you'd be wrong to think that...

So last week I had Huana Crystal Signatures™ therapy. It's therapy which is supposed to be a hands-on healing technique incorporating massage, colour, crystals and sound. I can hear you saying "yeah right" already. In fact, I snorted in disbelief when I heard what the therapy was all about. I imagined a strange lady in beads, florals and with a musky smell. Well, I was wrong... about the lady and the treatment.

Firstly, the ladies were professional and really smart. I was pleasantly surprised. June Kretzschmar and Traci Dragt were simply lovely! I fell in love with them within the first five minutes. They came into my home with a purpose (yes, they came to my home!). Within 10 minutes my lounge was transformed into a serene massage parlour, with music, scented candles and a strange sense of calm.

I was at ease immediately. I could undress in the comfort of my own home, and put on my own gown, which fits! Traci and June explained the treatment to me and made sure I knew and understood what was going to happen. And then it started...

I had to choose a card from a pack of cards, and this card determines the Crystal Signature treatment required. I was still sceptical at this point. I mean really now. Crystals and oils? Puhlease! Anyway, so the card I chose belonged to Signature 8, the Pento Garé, which means I needed help with sore and frozen joints, acceptance, forgiveness, connection of right and left brain, improved creativity, heightened senses, completion and movement. And so it started getting interesting.

So how were crystals and oils going to help me? The Crystal Signatures themselves are symbols which, when used on the body, resonate physically, emotionally, mentally and spiritually. The crystals and the Divine Resonance Oils are attuned with the energy held in the Signatures and, therefore, enhance the treatment.

The treatment
I laid down and so began a glorious massage. It was soft, yet firm, and very relaxing. I felt like I was floating on a cloud, and in fact... I was. When the massage started, Traci asked me to imagine myself in a huge pyramid which was lifting off the ground, I was to take a journey through the skies. I was probably the most relaxed I've ever been during that massage. I imagined myself soaring above the dessert in my pyramid, at one stage I even left the pyramid and jumped on a flying carpet. It was simply magical.

I was sorry when the massage was over, it was one of the most relaxing treatments I've ever received. But then it was time for those crystals. So I laid flat on my back, and Traci and June started moving around me with their crystals. I really was not prepared for what happened next. Traci held crystals over my ears and what I experienced can only be described as an electric current passing through my body. The heat coming from those crystals was amazing, and I felt a buzz going through my body all at once.

But then it started getting strange. My body suddenly felt like it was being pulled to the left. The force pulling it was so strong, I couldn't fight it. I felt vulnerable and a little worried. I had visions of having a stroke on the massage table – scary stuff. But it all settled down again and the rest of the treatment continued.

The crystals were placed all over my body and once again, I felt a slight buzz running through me. It felt good and comforting, but then they moved the crystal towards my left side... my knee jerked off the bed as soon as the crystal was placed on the left side of my body. I swear I didn't know why or how it happened, it just happened. I was a little bit freaked out. And then it got even stranger. When the crystals were placed close to my left hand, my hand started burning. I felt like that little electric buzz I had experienced was now a full-on electric shock to my hand. It felt heavy, and scary. I felt helpless and frustrated as I tried to move my hand and nothing happened. But as quickly as it started, it ended, and I was once again left with a warm fuzzy feeling.

Soon my body felt aligned, there was no more heaviness on my left side. I felt peaceful, relaxed and super-sleepy. Traci then helped me up, and I felt very disorientated and sort of deurmekaar. It took me a while to get my bearings, but once I settled down, I felt energised and ready to face the world. But not before a nap and fab bath of course.

What it all means
After I got dressed, I sat down the June and Traci and they explained what had happened. What was said next left me completely flabbergasted. They could tell me things that only someone really close to me would have known. Now before I tell you what they said, you need to know that I revealed no personal information about myself to them, and the only correspondence we had before we met was via email. These ladies do not know me on a personal level and it was our first meeting face to face.

So here goes. The reason the left side of my body felt so heavy was because my energy was unbalanced. The left side is what is known as the female side, and is also associated with the heart. Obviously I have loads of issues...

So what are my issues? Well, the knee jerk means I've been badly hurt by a female close to me. They explained it was probably a female family member like an aunt, grandmother or cousin, who had disappointed and hurt me. I was shocked. I felt at that moment that they had looked deep into my heart and seen everything. It was true! I had to choke back my tears, and they could tell me that I don't really cry much, and that's why I haven't really gotten over the hurt yet. I try not to cry, because it seems like a sign of weakness to me. So that was true as well.

Then they explained to me how I handle my emotions. And I don't handle them very well. I hide my hurt, and with each hurt, I build a wall around my heart a little higher. People don't know when I'm hurting or sad. I'm extremely private about my emotions and about my feelings. I also don't trust easily. There are very few people who are actually let into my circle of trust, and once it's broken, you can forget about ever coming back. I was left open-mouthed. I couldn't believe that crystals and some oil could tell these ladies everything about me. And the reason I found it hard to believe is because the "me" they found, is the "me" I keep hidden. Weird hey?

And then I wanted to know about my hand. The left hand is associated with receiving, while the right hand is associated with giving, therefore, I have a problem with receiving. The reason my hand reacted to the crystals the way it did is because I am a giver, and not much of a taker. I love giving people things, but find it really hard to receive gifts from people. Hectic!

Traci and June said to me that I needed to look after myself and my needs more. They also referred to my bottle of oil, and that they could see by the way the oil was mixing, that I had too much on my shoulders. I was taking responsibility and extra work on my shoulders which does not belong to me. My problem is, is that I try and fix everything for everybody and by doing this, I don't fix myself, or my own problems. The bubbles in the bottle also signified deep hurts in the heart area and mixed feelings about my emotions.

So how did I feel about all of this? Well, I was astounded. I felt as though these ladies knew my every secret and I felt a little vulnerable. But then I realised that this treatment was all about healing and finding the roots of my problems, and that's what I'm trying to do. I'm facing my hurts and trying to let them go, I'm also trying to not take on anybody else's problems and letting them deal with it themselves. As far as the crying bit goes, I'm not very good at that, but I managed to cut my hand with a pair of scissors last week, and while I was waiting for the doctor, managed to get a good cry in. I feel better already!

So if you'd like to experience Huana Crystal Signatures™ for yourself, contact Traci and June and they'll sort you out. Prices range from R250 a session.

Anthea's treatment was sponsored by June Kretzschmar, an Independent Reiki Master in Atlanteean, Usui and Tibetan Systems of Natural Healing and Traci Dragt, a colour therapist and Crystal Signatures teacher and practitioner from Colour me Happy. You can reach June at june@huana.co.za and Traci at tj@colourmehappy.co.za.

Would you be willing to try out this treatment? Tell us in our comment box below.