YOU'RE READING Miss SA, Rihanna, Minnie and pregnancy speculation - why you should never assume people are pregnant

Miss SA, Rihanna, Minnie and pregnancy speculation - why you should never assume people are pregnant 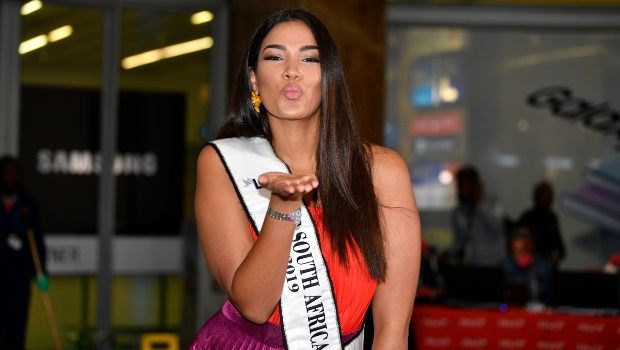 It was disappointing and equally maddening to see that once again, a publication had baited body-shamers at the expense of a woman.

This time, it was our reigning Miss South Africa, Sasha-Lee Olivier, who found herself as the subject of body-shaming under the guise of concerns over breaking Miss SA rules.

But thankfully, she garnered much support on social media as people came to her defense in the form of backlash aimed at City Press.

While many expressed their disdain for the speculative article, Channel24 reported that the Miss SA organisation would be taking legal action against City Press.

"The article is pure body shaming, implying that if Sasha-Lee is not pregnant then she is fat. Let us put it on the record that Sasha-Lee Olivier is a real person and is deeply hurt by what appeared.

"As part of the 2019 campaign, Sasha Lee stood as an advocate for fuller figure women and expanded on the organisation’s prior representations of beauty. We as an organisation stand strong with Sasha Lee with this understanding of beauty and do not take lightly to any form of body shaming and discrimination which is intended to disempower and humiliate her.

"The Miss South Africa Organisation will be taking legal advice and action," the article reported.

READ MORE: Kourtney Kardashian loves her body since gaining some weight while in quarantine

There are so many factors that could contribute to our tummies appearing a bit fuller right now, especially considering the fact that we are in lockdown and the winter season is upon us. Add to that bloating, PMS, endometriosis, and even the itis – among several other health factors.

This brings to mind Rihanna's 2019 pregnancy rumours sparked by the appearance of a small fupa at her annual Diamond Ball. When the Grammy award-winning artist's weight gain became visible circa 2017, it initially sparked pregnancy rumours and an onslaught of articles about her curvier figure.

And while she's always managed to retort with sassy and confident clapbacks, it's not fair to make assumptions about her or any woman's reproductive developments just because they don't have flat tums even in that fertile year of 2019 that was so abundant with pregnancy announcements.

READ MORE: Tumi Morake and 6 other local celebs who have been body shamed for their weight

This is why the re-emergence of Rihanna pregnancy speculation were as irksome as Miss South Africa's. When the internet caught sight of Rih's small fupa through her black velvet gown, they were convinced there's a baby on the way, and so the frenzy erupted.

Rihanna finding out she’s pregnant after looking at why she’s trending on twitter pic.twitter.com/7sMnENI4gW

And if you search "Rihanna pregnant" on Twitter, you'll have plenty more speculations to scroll through.

In a 10-minute Vogue makeup tutorial, the Fenty Beauty founder had alluded to having a few misgivings about her weight, mentioning that she learnt to contour when she gained weight, having also walked off camera briefly at the beginning of the video, saying "I feel fat".

Is it a coincidence then that the day after social media confirmed what she hasn't announced, Rihanna was spotted in public shielding her abdomen with a handbag?

This conversation also brings to mind a DRUM article published in 2019 that shared how according to Health24, weight gain becomes an inevitable consequence of falling in love or tying the knot.

READ MORE: OITNB star Danielle Brooks says she embraces her body changes and is relishing in its beauty

This article was in defense of local TV personality Minnie Dlamini Jones, who much like Rihanna, has been the subject of pregnancy speculations on numerous occasions since she tied the knot.

Business is going well...Let’s trust in God’s timing for the arrival of my offspring ???? We also need to be cognizant of how insensitive it is to speculate about pregnancy. You don’t know my journey or what I’ve been through or go through. Let’s just think before we tweet please???

This was not the first time Minnie who once spoke candidly about her weight insecurities during a radio interview with former 5FM talk show host Thando Thabethe, had slammed pregnancy speculations.

Late in 2018, the 28-year-old actress shared sexy snaps of herself while on a desert vacation with her best friend which she captioned, “No matter your size, shape (Or pregnancy rumors) Love your body, celebrate it!”

In another previous Instagram post, Minnie shared a snap of herself in a bikini in which she explained in the captioned how, “thin” she was during that period and that she never wanted to, “to be this skinny again.”

So what is the big deal surrounding weight gain and pregnancy especially after one ties the knot?

According to Parent24, society places a high amount of pressure on women who recently got married when it comes to childbearing. The latter is simply because childbearing becomes a primary goal of marriage.

Imagine how draining it must be have to constantly have to explain your fupa to strangers simply because you’ve tied the knot or you're in a relationship – it’s quite disheartening to know that even in 2019 this mentality still exists.

During an interview on daytime talk show Real Talk with former host Anele Mdoda, Minnie rubbished all pregnancy claims further stating that at the time she and hubby Quinton weren’t even trying. Perhaps until she publicly discloses that she’s doing so we should simply respect her privacy.

Actress Tia Mowry went through the same insensitive comments when she put on some weight in 2015.

In an interview with Huffpost Live, she said pregnancy rumors are based on assumptions about how she should look and what kind of body she should have.

“Asking a woman if she’s pregnant is a form of body shaming,” she explained.

“We live in a society that is so obsessed with being perfect … Why can’t we just be us?”

It’s probably high time we started to learn to respect people’s wombs and their weight – whether they’re in the spotlight or not. Pregnancy assumptions are not only invasive, but they can also trigger insecurities.

So until someone explicitly announces that they are pregnant, it's best to assume that they're not.

Both W24 and City Press are part of Media24.