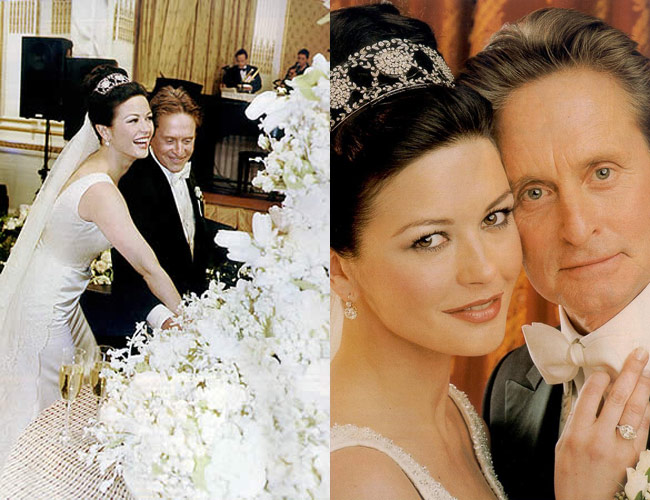 Catherine and Michael married in November, 2000 at the Plaza Hotel in New York City. It is rumoured to have cost $1.5 million and took place in front of 350 guests. The beautiful bride wore an ivory-beaded satin gown by Christian Lacroix, with a Chantilly lace train and a low-cut bodice. A tiara, borrowed from jeweler Fred Leighton, was also worn in her hair.
3
Christina Aguilera and Jordan Bratman Christina and Jordan married in November, 2005 near a forest at Staglin Family Vineyard in northern California's Napa Valley. The bride arrived in a white Rolls Royce Phantom. the 130 guests who attended the wedding were asked not to give the couple wedding gift's, but to donate to the Hurricane Katrina and Rita relief funds. Christina's dress was designed by Christian Lacroix. her hair was pulle back into a bun and adorned with jewels and flowers.
4
Lady Diana Spencer and Prince Charles Lady Diana and Prince Charles were married in February, 1981, in front of 3500 guests and an estimated television audience of 750 million people. The Archbishop of Canterbury described the wedding as "the stuff of which fairy tales is made". Diana's wedding dress was designed by the Emmanuels and feautured an almost 8 metre train.
5
Gwen Stefani and Gavin Rossdale Gwen and Gavin married in a beautiful London ceremony in September, 2002. The couple exchanged their vows in St. Paul's Covent Garden. The couple also had a vow-renewal ceremony in Los Angeles for their friends who couldn't make the London ceremony. Gwen wore a custom-made pink and white wedding dress for Dior by John Galliano, complete with an antique lace veil.
6
Mariah Carey and Nick Cannon The couple were married in a secret ceremony in April, 2008 at Mariah's Bahamian estate. There were only 40 wedding guests and Nick's family was not invited, but sent best wishes anyway.
7
Nicole Kidman and Keith Urban Nicole and Keith married in June, 2006. Nicole was apparently so overcome with joy that she cried all day before the wedding. Their venue was Cardinal Ceretti Memorial Chapel near Sydney, where they hosted over 200 guests and were surounded by more than 1000 candles. Nicole wore an original one shouldered Balenciaga dress, inspired by the Spring 2006 collection, and a bouquet of white roses and gardenias. Keith wore a classic tuxedo with a white-rose boutonniere.
8
Portia De Rossi and Ellen Degeneres Ellen and Portia had a very intimate wedding ceremony in August, 2008. They were married in front of their closest family and friends, as well as a few media representatives. Both brides wore Zac Posen designs and exchanged Neil Lane rings.
9
David Beckham and Victoria Adams Posh and Becks married in July, 1999, at Luttrellstown Castle, just outside Dublin, Ireland. The wedding, of only 29 guests, was held in a private room of the castle. Victoria wore a champagne coloured strapless Vera Wang gown with a 6 metre train. In her hair, she wore an 18-carat gold crown encrusted with diamonds by jeweler Slim Barrett. The groom wore an ivory and cream Antonio Berardi suit.
10
Tom Cruise and Katie Holmes TomKat got hitched in November, 2006, in an elaborate ceremony held at Odescalchi Castle in Italy. 150 guests attended the festivities. The entire wedding party was kitted out in Armani and Katie reportedly spent $3000 (R 21768.85) on lingerie. Her dress was an off-the-shoulder Armani gown with an ivory silk train adorned in Valenciennes lace and Swarovski-beaded crystal embroidery.
11 … And last, but definitely not least, is the most talked about wedding of 2011: William and Kate.
They might have ended in heartache, or had a happy ending, but these celebrity weddings will definitely not be forgotten!