Meet the wedding couples who made their geek wishes come true 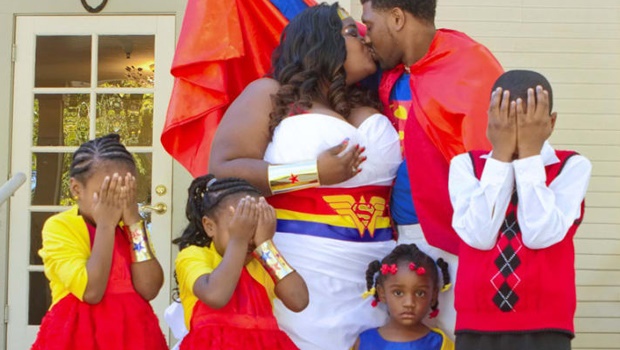 Image credit: Jacquelyn Phillips photography.
This is what happens when fandom and fantasies bring couples together.

With Black Panther’s release just around the corner, it got us to thinking about how people celebrate their enthusiasm for their favourite comics, movies and games.

Fictional characters and worlds are fantastic in the sense that there is always something we find in these worlds that we can relate to.

Seeing people incorporate elements of the pop and geek culture in their everyday lives is so much fun. It’s even better when it’s something that’s brought a couple together and we can watch them celebrate and pay homage to their favourite pop culture icons or genres by including them in one of the most memorable moments of their lives - their weddings.

Here are some of our favourites:

Side note: It was actually quite hard to find more POC and folk from the LGBTQIA community.

I’m pretty sure these demographics actively celebrate their love of geekdom, so if you’d like to point out to any couples I’ve missed (or if you’re one of those couples that would love to be featured, send us your pics and story. More details on how to submit at the end of the article).

Anyone who is a fan of Minecraft, a game that at its basic level, allows you to build and create your own worlds using resources that you have to gather and which offers different modes of game play depending on what you're looking for, will be able to appreciate the sheer inventiveness and geekiness of this couple’s wedding.

According to thegoodness.com, Matt and Asia, two Minecraft players who met at church but were really brought together by their love of the game, went the extra mile for their celebration.

With the help of friends and through props that were donated from MineCon - where Matt actually proposed – the couple ending up having the best kind of wedding that any gamer could dream of having.

So much wedding goals here!

The Mass Effect gamer wedding of your dreams

I’ve recently gotten into playing this game franchise and have become such a huge fan. When I saw this post featuring a couple cutting their sci-fi themed cake with an omni-tool, I squealed with joy. It’s a multi-purpose device that characters in game can use to perform functions that include hacking, enhancing abilities, boosting shields, to mention but a few. I haven’t played all the games yet, so I'm not entirely sure if and how they’ve changed in later games).

Definitely a theme that deserves a round of applause.

Okay, okay, this is technically a styled wedding shoot but the photos are so epic I couldn’t resist sharing since it pays homage to one of Disney’s most beloved movies of all time.

Bustle.com reported that for this shoot, Model Traci Hines (who in real life, embraces all things mermaid-y),  and Leo Camacho teamed up with an online wedding marketplace to create the kind of shoot that not only celebrates all things Under the Sea, but one that will be sure to inspire fellow nerds to create their own magical Disney-inspired wedding.

May the wedding force be with you

Because what would nuptials be if you don’t have Stormtroopers as your escorts, right? Loved-up couple Jennifer and Josh had a fantastic wedding which incorporated Jennifer’s love of Star Wars right down to the décor.

Buzzfeed showcased the couple’s dream wedding which not only featured the troopers but also included details in Jennifer’s actual wedding dress in the form of a Stormtrooper  belt for her and Princess Leia belts for the flower girls.

WATCH the video of their wedding here: One comic hero is great. Two comic heroes are even better, which is why we love Reinesha and Devan’s Wonder Woman meets Superman themed nuptials.

According to AZfamily.com, the couple chose this as a theme because Devan thinks of her as being a Wonder Woman for having been a single mom who worked tirelessly to get things done, while Reinesha thinks of Devan as being her Superman for always being there to support her. They got married in 2014 and are still happily together.

The couple has one of the best wedding photos we’ve seen and we really love how  they’ve merged the two iconic heroes and made one big celebration out of both of them.

Our love for the show Once Upon A Time inspired our wedding theme and engagement photoshoot. I love her forever and ever .... And ever after. Two princesses can fall in love. @onceuponatimeinstorybrook @disney #cinderella #belle #lesbehonest #fairytale #romantic #engagementphotos #romantic #magical #equallove #loveislove #GiveElsaAGirlfriend #onceuponatime

While we have no doubt that Yalonda and Kayla Solseng’s wedding was absolutely magical, I actually want to bring your attention to their epic, Disney and Once Upon a Time inspired engagement shoot that saw them don Cinderella and Belle costumes.

Both women, according to Buzzfeed, are huge fans of Once Upon a Time and had the easiest time deciding on which princess they’d dress up as  - Yalonda as Cinderella and Kayla as Belle. We’re decidedly happy that these two lovebirds have bonded over this show otherwise we’d never have this magical photoshoot.

Have you and your loved one incorporated a geeky theme for your wedding? Send us your photos and we’ll feature it in a future article.

The San Diego Comic Con is one of the biggest events that attracts attendees from all over the world.

In 2017, Syfy one of the major networks and sponsors for the event, decided to bring their A-game by giving couples the best kind of gift to celebrate their geeky love: A Geek Love chapel officiated by actor Orlando Jones.

Here couples could get married or renew their vows and best of all do it in costume if they wanted to or not. It definitely proved to be popular because even celeb Ian Zeiring and his wife ended up renewing their vows.

We Got Married ?? ...again... seriously, crazy things happening here at Comic Con for @ianziering ! We randomly decided to renew our vows with @syfy today while walking down the isle to the Jurassic Park theme song and exchanging wonder woman and Batman rings along with our girls ... seriously what could be any cooler. ????#comiccon

Have you and your loved one incorporated a geeky theme for your wedding? Send us your photos and we’ll feature it in a future article.