Cardi B’s style evolution - she has come a long way The unapologetic style icon. . Credit: Getty Images
Cardi manages to be distinctive at a time when it’s never been easier not to be.

I started following Cardi B's rise to fame in 2015 when she first appeared on the reality show Love & Hip Hop as a stripper/aspiring rapper. If you had told me then that she'd be performing at the Grammy's alongside some of the biggest stars on the planet and gracing the cover of Rolling Stone, I probably would have believed you.

Her star was bright back then and even with all she has accomplished music-wise, what has really stood out for me is how she has managed to position herself as a style icon in such a short period of time.

Cardi has been named "New York Fashion Week's Undisputed (and Uncensored) Front Row Queen" by Vogue Magazine. Cardi found her lane in style with the help of her stylist Kollin Carter in early 2017, just as her career took off. Unsurprisingly, her aesthetic is very much that of a flamboyant rapper, thigh-high boots, colourful furs and diamond watches. Let's not forget about her elaborate nails.

READ MORE: PICS: The most striking looks from NYFW front row so far

The relatability in her style is most seen her in continued devotion to Fashion Nova, the fast fashion brand made famous on Instagram. Cardi reportedly earns $20,000 (R282 293,20) a month from the brand to advertise on social media in what can truly be described as a genius move for both parties. She has a unique gift for making you believe she truly is a fan of the products she’s selling and would wear them whether or not she was being paid.

She seems to favour monochrome getups in pink, white and silver along with a seemingly endless supply of fabulous wigs that always match her outfits. Her style matches her personality so perfectly that we can't help but say owwww.

We decided to put together a timeline of Cardi's epic style evolution, enjoy.

Following in the footsteps of iconic female rappers before her This look, from September 2015, emulated the unapologetic aesthetic of female rappers that came before her, like Lil' Kim and Nicki Minaj. This outfit is reminiscent of the iconic purple sequined pasty ensemble Kim wore to the 1999 MTV awards.

Back when Cardi was figuring her style out 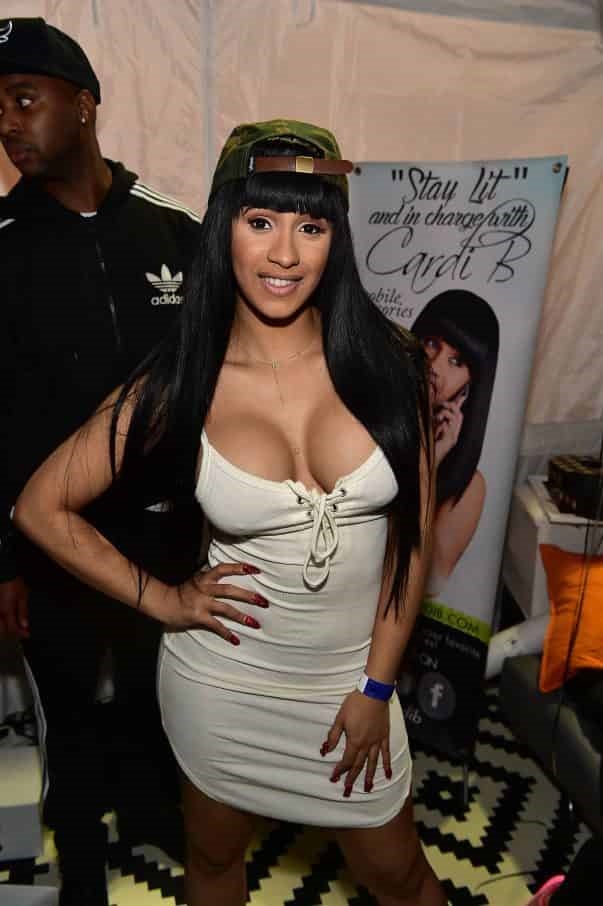 This is not an outfit we'll probably never see Cardi in again. The peak cap and simple dress might be a bit too played down for Cardi's style today. However, the outfit still speaks to Cardi's fierce and sexy personality so it's easy to imagine the rapper wearing a similar outfit today, with a bit more flare of course. READ MORE: This is exactly how (over the top) we want to dress for the rest of the year

Cardi soon started showing her growing success through her style On the 12th of February 2017, Cardi wore a white fur coat and a Gypsy dress for a Gypsy show at NYFW.

Cardi has always been a big fan of labels, before Bodak Yellow spelled it out for us. Similar to Lil’ Kim’s looks and other black female artists in her genre, Cardi B has come to show off her success and her own embrace of her sexuality with luxurious style flexing. This photo of her in a white fur coat came just a few days after she had signed a major record deal with Atlantic Records.

The Britney caption says it all.

Once the red carpet became a norm, Cardi established her diverse sense of style Cardi stunned in an off-shoulder Christian Siriano ball gown for Rihanna's 3rd Annual Diamond Ball at Cipriani Wall Street in New York City. To say that this was a shocking style choice, is an understatement.

The look solidified her as a fashion chameleon and that there is more to her fashion than the Bronx street style she was famous for.

The diamond-colored, conservative, floor-length gown played a stark contrast to the styles we’d come to know the artist for in previous years. The appearance was an alert to fashion designers around the world that the Latina’s eccentricity could give even a royal a run for their money.

READ MORE: What would you wear if you were invited to New York Fashion Week? On the 28th of January 2018, Cardi attended the 60th Annual GRAMMY Awards at Madison Square Garden in NYC. In this gorgeous look, Cardi proved that she can be just as graceful and and elegant as she wants. For the 2018 Met Gala theme, "Heavenly Bodies: Fashion and the Catholic Imagination". A heavily pregnant Cardi showed up looking bold and magnificent in a Jeremy Scott creation with a jeweled encrusted crown to top the regal look off.

We stan an evolving queen.