Credit: Getty Images
See 10 of our favourite looks from the Stranger Things star.

With her trademark plaits and quirky sunglasses combo it looks like this 13-year-old British actress and model may be our next style muse.

Vanity Fair called her "the coolest teen at the Teen Choice Awards", where she recently rocked a pair of small-framed, vintage sunnies and a canary yellow Kenzo frock. This Stranger Things star made her big modelling debut in January this year when she appeared in Calvin Klein's By Appointment campaign as the youngest face to ever front one of their campaigns.

It therefore only makes sense that she was rubbing shoulders with high-fashion aficionados such as Anna Wintour and A$AP Rocky at the Calvin Klein show at New York fashion Week earlier this year, donning a classic blue jeans and leather jacket ensemble. When she's not hobnobbing with fashion royals at runway shows, Millie attends awards shows and brings some teen spirit to the red carpet.

She attended the BAFTA tea party in this Burberry dress with a head-turning bow. Very British, daahling. A beauty in a Red Valentino sheer gown at the 68th Emmy's red carpet. She sparkled at the 74th Annual Golden Globes in this silver knee-length dress. 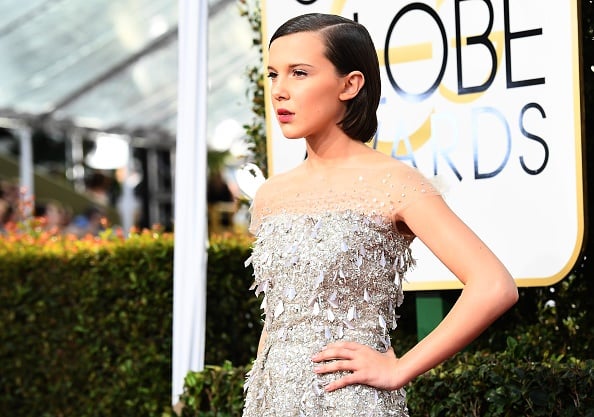 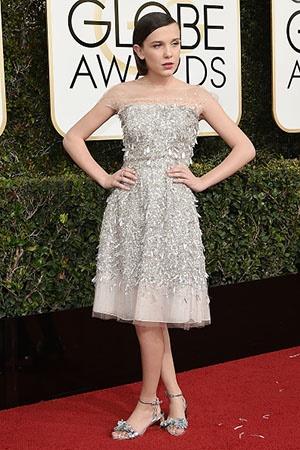 Who says you can't act goofy on the red carpet? She graced the blue carpet for the UNICEF 70th anniversary event in a regal maxi and a pair of shimmery black Kate Spade shoes we wouldn't mind owning. This trendy teen also has some street style flare, which we'll probably see more of as she makes her way to the top.