YOU'RE READING Miss SA 2019, Zozibini Tunzi, crowned with the newly unveiled uBuhle Crown, here are the crowns that preceded it

Miss SA 2019, Zozibini Tunzi, crowned with the newly unveiled uBuhle Crown, here are the crowns that preceded it Zozibini, a 25-year-old from Cape Town, is the new reigning queen and we're excited to follow her journey in her new role. She walked away from the competition with R3 million in prize money and sponsorships - she is also the first Miss SA to wear the uBuhle Crown.

#MissSA2019 was a glorious occasion.

We welcome our new reigning queen @zozitunzi to this special sisterhood. pic.twitter.com/q32bHMsjhB

South Africa has embraced 60 women over 60 years as the faces of our nation upon taking home the coveted Miss South Africa crown.

Women from all backgrounds and cultural groups have instilled a sense of pride in us as they represented SA across the globe, and we have no doubt that Zozibini is just as worthy a recipient of the honour as the women of gravitas who came before her.

The bevy of this year's top 16 finalists was present at the unveiling of the new American Swiss Miss South Africa crown held earlier this week. It is one that is a prismatic representation of the diverse group of finalists. The uBuhle crown is handcrafted with premium Sterling Silver, with a purity of 925.

It reportedly took 36 hours of stone sorting to select the white fine-cut Cubic Zirconia stones that have flawless crystal clarity similar to that of the whitest diamond and the coloured fine-Cubic Zirconia stones that exude an exceptional and vibrant brilliance. These 2586 stones were hand cut and set by master Diamond cutters and have a total weight of 182cts.  The crown has a total weight of 517gms.

READ MORE: Miss South Africa announces their most diverse group of finalists yet - is this the picture of representation we've been waiting for?

"What better way to celebrate the rich cultural diversity of our nation, than with uBuhle uthingo lenkosazana – the beauty of the rainbow. Carried with grace and beauty, shining light across the nation and beyond,” says Zimbini Peffer, Marketing Director at American Swiss Fine Jewelers.

American Swiss collaborated with world-renowned jewellery designer, Johan Louw, who shared how the "pattern on the crown is inspired by a Ndebele print that is by used by women for self-expression. It is easily recognisable as South African."

"I wanted the special woman chosen to be crowned with a beautiful creation of which the origin is instantly recognisable," he adds. As the new Miss SA, Zozibini took on the duties of Miss SA 2018, Tamaryn Green, at the pageant coronation on Women's Day, the moment was marked by the change from the Enhle crown to the uBuhle crown - perhaps a metaphor for how although the successor and her predecessor may be two different women, they still represent the same values, ideals and beauty that each Miss South Africa embodies.

So let's take a brisk walk down memory runway and look at the crowns worn by Miss SA winners over the 2004 - 2018 period: 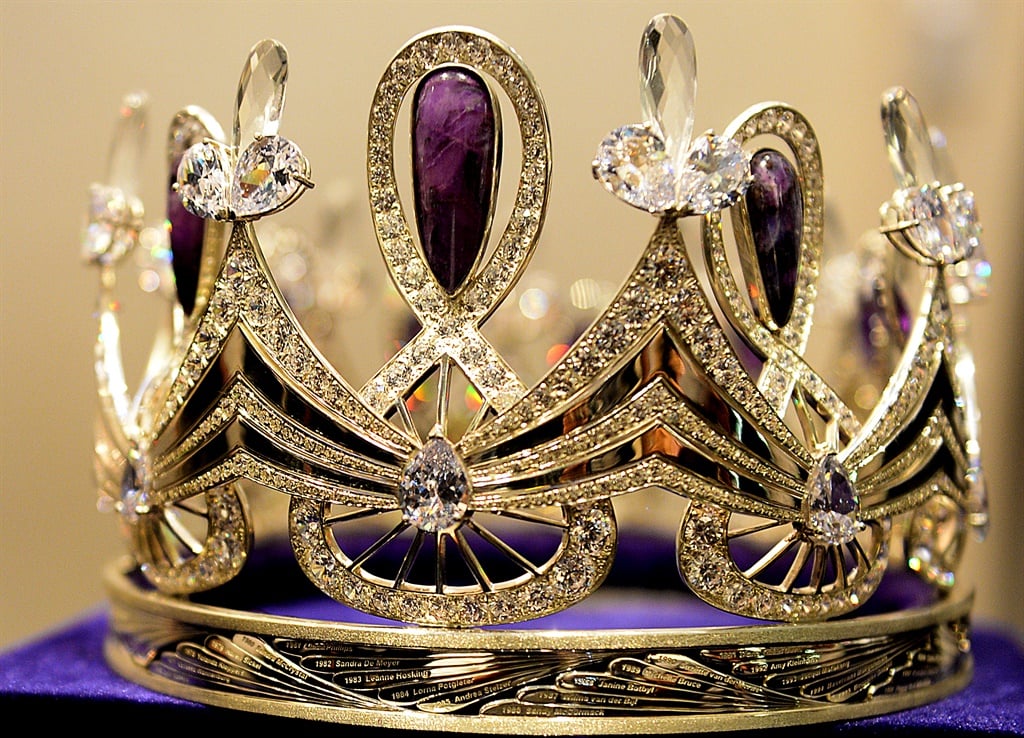 Enhle was unveiled in February 2016. The crown, made from silver, was designed by Jack Friedman Jewellers. A key feature of the crown is the inclusion of an infinity sign to symbolise the enormity and ongoing nature of Miss South Africa's role, not only during her year of reign but into the future.

According to the Jack Freidman website, "the three main stones are Sugilite also called Luvulite (sold as the stone of love). This gorgeous stone is mostly purple and most often associated with royalty. The deposits of this unique translucent violet stones come from South Africa. The mine where these specific stones were mined is in a town called Hotazel in the Northern Cape. This violet crystal has a highly protective and healing property. One of Miss SA’s privileges is to assist in the healing of our nation and its people and this stone will protect her in doing so."

The team at Jack Friedman Jewellers reportedly wanted something that was both elegant and memorable. They decided to make the crown from platinum, one of the rarest elements in the earths crust, and synonymous with South Africa which accounts for 80 percent of world production. The precious metal in the Miss SA 2014 crown came from Anglo American Platinum.

Palesa has also adorned the heads of Liesl Laurie and Ziphozakhe Zokufa.

On the 29th of March 2015 a girl's lifelong dream came true... The following day, a young woman's destiny began. Ladies and gentlemen, Miss South Africa 2015 is... Liesl Laurie. • From Eldorado Park to the WORLD! WHAT IS MEANT FOR YOU WILL NEVER MISS YOU ?? #MissSA2015

READ MORE: 12 of the most gorgeous Miss Universe dresses of all time

The exquisitely crafted tanzanite crown with peaks slightly reminiscent of King Triton's one is one that essentially established a hallmark era of Miss South Africa winners.

A scroll through the Miss South Africa page will reveal to you a heavyweight list including Claudia Henkel, Nokuthula Sithole, Megan Coleman and Tansey Coetzee. May uBuhle uthingo lenkosazana usher in a new era of diverse Miss South Africa winners we are proud to call our ambassadors.

Oceans, mountains, books, travel, a G&T on the beach with sunset view, no drama, no hangups, patient, caring, loving, sensual, affectionate, feminine, not needy. is that 20...
Confirm profile
Sign up for the hottest trends, beauty tips and more. Sign Up