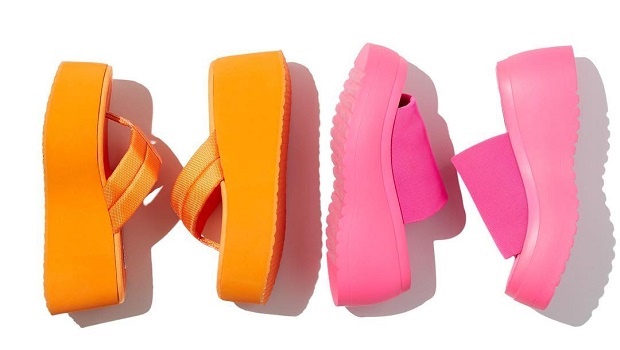 You might consider sitting this one out. Credit: Instagram
This throwback shoe is landing some people in hospital.

I knew it was only a matter of time before my FAVORITE shoes of all time came back... I wore them everywhere the summer of 1999 and can’t wait to have a repeat summer of 2019?? #OGstevemaddens #summershoes #platformsandals #blackonblack #teacherlife #teacher_agent

READ MORE: How to take care of your feet

The three-inch foam and rubber sole platform sandals were a trend in the 90s and have been recently reintroduced by US designer Steve Madden in collaboration with Urban Outfitters.

Spice it up.?? The @SteveMadden X @UrbanOutfitters collaboration drops today. Head to the site to grab your pair of these #limitededition throwbacks now! #SteveMaddenxUO

They are so popular that Footwear reported that they were flying off shelves within hours of release.

However, they have triggered warnings from a team of doctors from the American Podiatric Medical Association, represented by spokesperson and podiatrist Hillary Brenner.

Hillary says these kinds of shoes are terrible for your back, ankles and feet. “Definitely stay away from this one,” she said to New York Post.

Explaining the danger she said the platform sandals’ rigid soles can throw off your posture and could twist your ankles.

READ MORE: Are you wearing the wrong shoe size? Here are the risks

“Your foot is trying to bend a certain way, but the shoe is fighting you because it’s so rigid,” she clarified.

The concern is so real that she says, “nine times out of ten,” platform sandal-wearers consult her for ankle sprains.

Fox News reported that even if you don’t feel pain or land in hospital, there are still long term effects.

“You are not in proper alignment, so over time, that can add a lot of strain on your back,” Hillary cautioned.

She suggests women opt for flatter sandals that have a wide platform that is almost parallel with the ground but warns that the stiffness of the sole can still interfere with walking.

Take Your Pick. Which #Color?

The podiatrist says you are safer if you can bend a shoe slightly with your hands, because that allows you to shift your weight while you walk.

"I obviously had a pair of platform sandals in the late 90s/early 2000s. I was wearing them when I broke my foot. I am not here for this trend," wrote one woman on Twitter user.

You're going to love KAREENA.

Some fashionistas were not so convinced by the foot doctors, claiming they wore the shoes back in the 90s without problems.

Other Twitter users said they are diving headfirst back into the 90s despite the warnings.

We used to wear them in the 70s. Never did my back or ankles any harm.

In defense of Steve Madden, all of my Maddens are super comfortable, pliable and affordable. I’m also a woman of a particular age ?? Keep ‘em coming

Are you taking the doctors' advice? chat to us here

My life is alone whant some fun and fun and adventure and loving kind money do not count in relationship
Confirm profile
Sign up for the hottest trends, beauty tips and more. Sign Up