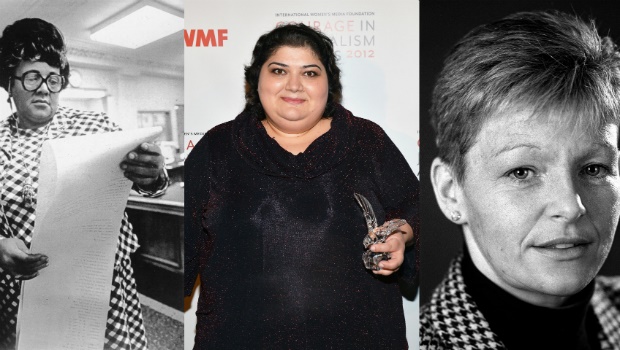 In this list, we look at the bravest, boldest women in journalism, including both writers and photojournalists.

In a career that spanned over decades, Ethel Payne achieved a number of firsts. She was not only the first female journalist to cover international news, but became one of the first black women to be accredited to the White House press corps. She was subsequently given the affectionate name, First Lady of the Black Press.

Combining journalism and advocacy, she covered the Vietnam and the Civil Rights Movement, earning a reputation for "tough, aggressive" questions. It was never well received when she grilled President Eisenhower on segregation and other issues of racial concern. The Washington Post reports that this almost got her accreditation to the White House revoked as she "asked questions that seemed to irritate the president".

Ethel is remembered today as one of journalism's most determined heroes.

In 2012, she was threatened with the release of footage from a hidden camera if she didn't "behave". She refused to give in and the next year, was arrested when she took part in a peaceful protest. Since then she's had several other charges pressed against her. Khadija was widely criticised as politically motivated, and as such continues to be described as a thorn in the government's side.

Described as a "one woman WikiLeaks" by Politico, the Maltese journalist has dedicated her life to expose corruption. Daphne has become known for her stories on organised crime, gambling and money laundering.

Despite threats, lawsuits and arrests, she refused to let up. The journalist has had her house set on fire twice and two of her dogs were killed. Sadly, in 2017 after she published reports on government officials named the Panama Papers, she was killed by car bomb. Three men were charged, but never brought to trial.

This Mexican journalist has defied threats from police, politicians and businessmen involved in sex crimes such as trafficking and violence against women. In 1999 she was beaten and sexually assaulted, in which she described as a retaliatorial attack for her reports.

After exposing a pedophile ring in 2005, she was arrested and threatened with rape. She continued reporting in Mexico, but in July 2019, thieves stole her research and killed her dogs, causing her to flee the country.

Lydia's work has been recognised internationally with the Civil Courage Prize.

Irish journalist Veronica Guerin rose to prominence in the '90s for her reports on local criminals and the IRA. She had a knack for quickly earning the trust of her sources and developed a reputation for being a reporter who relentlessly pursued the truth regardless of personal safety.

However, her investigations into Dublin drug dealers illicited several death threats and in 1994, two shots were fired into her home. The following year, she was shot in the leg. Nonetheless, she resolved to forge ahead with her investigations.

Tragically, in 1996 she was fatally shot by gang members who worked for drug trafficker John Gilligan. Veronica's name continues to be a symbol of bravery and perseverance.

Death threats, a mock execution and poisoning - these are just some of the failed attempts to deter Russian journalist Anna Politkovskaya.

One of the most outspoken voices covering the second Chechen war, she exposed to the world the human rights abuses on both sides of the conflict.

Throughout her career she was constantly harassed, beaten, humiliated and on one occasion, she was subjected to a mock execution by Russian military forces. Anna was no friend of Vladimir Putin's, accusing him of a "Soviet abyss".

Sadly, in 2006 she was murdered in the elevator of her apartment building.

Few journalists have blazed trails like Nellie Bly, the pen name of one Elizabeth Cockran. Pioneering a new kind of investigative journalism in the late 1800s, she worked undercover to report on female factory workers.

When factory owners complained, Nellie was reassigned to societal reporting, so after a brief stint as a foreign correspondent for Mexico, she moved to New York. There, she went undercover again to investigate patient treatment at a woman's asylum. Feigning insanity, she was institutionalised and experienced these abuses first-hand.

Her reports prompted reforms and made her a household name. She later circumvented the globe in record time, a journey inspired by the book Around the World in 80 Days.

Nicknamed Maggie the indestructable, she was America's first female war photojournalist. As a photojournalist, she achieved recognition in the 1930s.

During WWII, she risked life and limb to photograph the German invasion of Moscow. Margaret also became well-known for her photographs of the violence that erupted during the 1947 partition of India.

Born a slave a year before Lincoln's emancipation proclamation in 1863, Ida B. Wells grew up in the Jim Crow South. In 1889, she became the editor of the Memphis Free Speech and Headlight, where, due to her articles criticising segregation, she lost her teaching job, so she threw herself into investigative journalism.

Her reports on local lynchings led to a white mob burning down her paper's office. However, she continued to speak out and also became an integral part of women's movements.

Marie was a war correspondent of now legendary courage. She covered conflicts around the world, inlcuding the Middle East and Kosovo, where she helped save the lives of 1500 women and children.

In Sri Lanka, she lost her eye to an RBG, but still submitted her report on time.

In 2012 she defied attempts to stop her from entering Syria, sneaking in via motorcycle. Her stories expose many atrocities committed during the conflict. Trgically, she was killed during a bloody siege. Today, she is remembered as one of the greatest war reporters of all time.