YOU'RE READING Fighting the HIV stigma 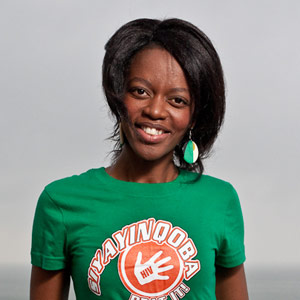 A brave young woman fights for the rights of those who are HIV positive and spreads the message of positivity.
At the age of 15, Nokubonga “Bonga” Yawa’s life changed dramatically. She fell pregnant and her subsequent HIV test came back positive.
“I was going out with an older guy. He looked after me but when I fell pregnant in 2002, he ran away to East London,” she recalls.

She joined a PMTCT (Prevention of Mother to Child Transmission) support group, which gave her support and strength and when she was eight months pregnant she was able to take AZT and give birth to an HIV negative baby girl, Sinaye, now seven years old.

Painfully aware of the fact that many of her earlier lifestyle choices were also being made by other teenage girls, Bonga decided to join a support group and learn more about HIV & AIDS. She wanted to empower herself and prevent others from getting HIV. In order to break down widespread stigma, she has been open about her status: “There are 5.7 million HIV positive people in South Africa. Where are they? Those who know, do they care? Do they use condoms all the time? How many are there who don’t bother to test?” she wonders.

“I joined TAC (the Treatment Action Campaign) in 2004 and started attending Saturday workshops. I also joined a group for teenage mothers where we were taught a range of skills.” Nokubonga was a full-time volunteer before taking up paid positions for her work.

When CMT (Community Media Trust) approached her to feature in a Siyayinqoba Beat It! show on teenage pregnancy in 2007, the charismatic young woman with a ready smile, agreed to share her story to reach young people beyond the Western Cape. CMT subsequently asked her to become the host for Siyayinqoba Beat It! in 2009. “I’m not a trained journalist but I do my work whole-heartedly!”

Nokubonga receives lots of letters from viewers, comments on Facebook as well as phone calls in response to every Siyayinqoba Beat It! show. “Some have told me that I am the only reason they take their treatment, the only one doing something for them. But there are many people who fought for access to ARVs, this is my way of contributing,” she explains. “And I must make sure that those who are HIV negative stay like that!”

Some of the topics Siyayinqoba Beat It! tackles generate strong reactions from audiences: “I’ve had to deal with a strong reaction from men who were angry at me for having talked about circumcision, but I feel that talking about it contributes to reducing the risk of infections. I will talk about it again,” she states openly.

Some of the topics Nokubonga feels strongest about are gender violence, abuse and education: “Children and teenagers really need someone to talk to about sex,” Nokubonga argues. “It doesn’t help to be shouted at and avoid the issues. If parents were more involved it would make a difference.” A lot of children at Equal Education confide in her; some have told her they are gay and fear coming out to their families or communities.

As a young person who has received counselling, accepted her status and is openly living with HIV, she is a role model to the community. Nokubonga has been on ARV treatment since 2005 and by sharing her story she encourages, inspires and motivates people around her: “I want to show people our humanity. That we are equal, we can work and are valuable members of this society.”

Nokubonga has been a TAC volunteer peer educator, encouraging the youth to get tested, counselling those who are HIV positive, to provide support and educate them about living with HIV. At present, she is working full time as a youth group leader at Equal Education (EE), an NGO, which is working for quality and equality in South African education.

Her biggest dream is to complete Grade 12, then take up journalism studies and see Sinaye, pretty, clever and creative, go far in life.
When she manages to take time out, Nokubonga loves watching movies, cooking, going for walks on the beach with her daughter and spending time with friends.

About Siyayinqoba Beat It!
Siyayinqoba Beat It! is the first television show in the world for people living with HIV. It has been broadcast on SABC1 since 2004 and on eTV before that. The 2009 season was broadcast weekly, Thursdays on SABC 1 at 13h30, with repeats on Tuesdays at 10h00. The upcoming season will air on Sundays at 12h30.

Siyayinqoba Beat It! tells the stories of South Africans who are living with or affected by HIV & AIDS through a documentary format that promotes positive living and HIV prevention.

The show provides a glimpse into the lives of people who have been motivated to effect positive changes. Through the show these characters and the people who have assisted them - the local district nurse or family planning counsellor – deliver simple scientifically-based messages that are not culturally exclusive. Siyayinqoba Beat It! not only motivates the viewers to reflect on their own lives but provides the possible solutions or answers. It furthermore communicates an important message of hope to all people affected by HIV.

Season VI, which will start on 26 September 2010, will draw on a team of Community Journalists (CJs) based in KwaZulu-Natal, Gauteng, Eastern Cape and the Western Cape who research, write, shoot and tell the stories which most affect them and their communities.

Every season, CMT trains a new set of Siyayinqoba CJs on the issues of HIV, themes relating to HIV, such as Gender Based Violence, as well as intensive “on the job” training in television production skills.

The programmes are personal, informative and educational. By sharing successful personal experiences, the CJs motivate young people living with HIV and their support networks to take action, seek further information and get involved in their communities.

Siyayinqoba Beat It! is the show for everyone living with HIV, their partners, family members and friends and incorporates stories from eight of the nine provinces and on occasion from other countries in the region.
We travel to both rural and urban areas to present stories and we regularly feature marginalized and vulnerable groups, such as young women, children, prisoners, mobile populations (e.g. migrant and seasonal workers), men who have sex with men, sex workers and substance abusers in the show.  See www.beatit.co.za for more information.

Wow, we think she is a brave young young woman. Do you also preach the HIV gospel? How are you getting rid of the stigma in your workplace?