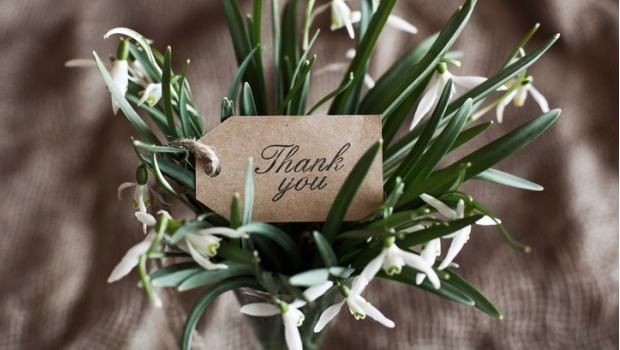 Thank you note to generous givers. Credit: iStock
Many of us have been blessed by a person who has helped us in a desperate time of need, evidence that good Samaritans still exist.

Not all heroes wear capes however, and this applies to 80-year-old retired chemist Judith Jones and 70-year-old psychoanalyst Carolyn Kenyon.

After learning about RIP Medical Debt, a charity that empowers donors to forgive billions in oppressive medical debt, they decided to start a fundraising campaign.

READ MORE: Five tips to sort out your budget for a stress-free Dezemba

Well over half of cancer patients in America are in debt because of the cost of treatment. No one should ever have to go into debt to save their life. #meddebtprobs pic.twitter.com/E5s1J4MAeu

The two extraordinary women assist people with medical debt and in just three months, they raised $12 500 (R175 000) and sent it to the medical debt charity.

“We tried to get people interested in the seriousness of medical debt and lead them to understand that when the New York Health Act passes, that will be the end of medical debt, because everyone will be covered,” Jones told The New York Times.

READ MORE: Naomi opens up about how she has been affected by HIV/Aids

In lighter news and in honour of cheerful givers, people who devote their time and resources to help advance the welfare of others and those who perform random acts of kindness; here are some great moments where celebs jumped in and surprised those in need...

A matric farewell is a huge milestone in many young people's lives. It's a point between childhood and adulthood, an opportunity to bid farewell your high school life and say hello to varsity. Reality star, Bonang Matheba knows this all too well. She attended her own matric farewell in a stunning pink gown accompanied by her date.

However, attending a matric farewell can be costly and students from underprivileged homes simply cannot afford it. Bonang came through for three lucky ladies this year. She gave away three of her favorite gowns and offered a full makeover to her recipients.

Win one of these gorgeous dresses from @bonang_m and a full makeover by her glam squad, for your matric dance.
Send a motivational email to womenofthefuture@bonangmatheba.com #WomenOfTheFuture pic.twitter.com/0Yd3Ye0Jhc

Tbo Touch is continuously assists random people whenever he can. We will never forget the day he donated 12 000 school bags to five schools in Diepsloot.

This has been the best day in 2017.we are visiting 5 schools in Diepsloot delivering 12 000 school bags with toys and stationery. Let’s continue to make a difference with the Little we have! Thanks to the incredible partnership @steyn_city @auto.general & @touchhdonline we should never cease in well doing. #whatatimetobealive

We know Enhle Mbali Maphumulo as a talented actress and a devoted mother and wife to her DJ husband Black Coffee. However she is also a businesswoman and has now started her own Foundation called Enhle Cares. The actress wants to do her own bit in positively changing the lives of young people, and we applaud her.

Thought I was going in to encourage students little did I know that @capitecbank has a beautiful math foundation that helps students reach their true mathematical potential. Wish I had this back in the day don’t need to give me anything to tell people how amazing this is ???????????? #simplylive #simplylove #simplyenhle??????