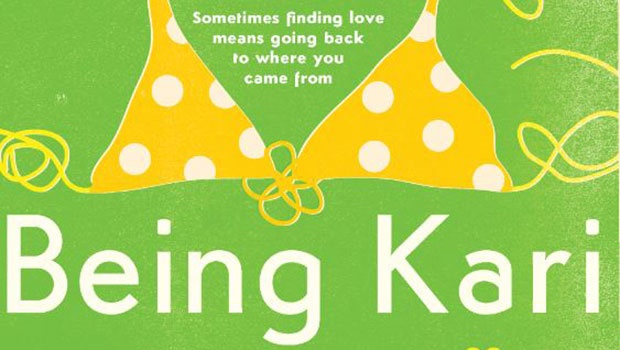 About Being Kari by Qarnita Loxton

For Kari du Toit, Valentine’s Day will never be the same again. When the love of her life reveals he’s been unfaithful to her, life, romance, and everything in-between come crashing down. Suddenly it seems as if her previous life – one far removed from Bloubergstrand’s sandy beaches – is slowly catching up with her.

After ten years of silence, Kari receives a call from her estranged brother. At the foot of Devil’s Peak, where neighbourly salaams and burkas are as ordinary as yellow polka-dot bikinis in Blouberg, she once again becomes Karima Essop, daughter of Amina and Farouk Essop. Daughter, sister, deserter.

For Kari, sometimes finding love means going back to where you came from.

This excerpt has been published with permission from NB publishers.

Friday, 14 February. V-Day. V for VictoryValentine was what I was hoping for. But by five o’clock I had waited long enough. It was feeling less V for Victory and more V for VeryFuckingAwful.

I sent Dirk a message.

Nothing. No WhatsApp double tick. No message back. No surprise.

So I did the only thing left to do.

I opened the bubbles. No point in being cross when he got home; better to be tipsy, I figured. It would make it easier to do the most important thing – Be Nice to Dirk.

Not Dirk. Just Lily, her big doctor brain full of stupid jokes. She knows Dirk’s old gem about liking a nat sjokoladekoek. “Is it an Afrikaner thing?” she always asks him. They laugh every time. Lily’s the L in our WhatsApp group LSDoK – Lily, Shelley, Di, Owen and me. They think I’m mad to bother with Valentine’s, and me making a cake for Dirk is next-level mad.

I’d been ignoring them. But by six I was starting to think maybe they were right. I was ready to tell the whole lot to come eat the cake themselves. The only thing stopping me was Dirk.

What if he was still stuck in the air and he did actually get home later? He wouldn’t be thrilled to see a WhatsApp group all squashed onto the couch. But if his plane was so delayed that he only made it home tomorrow, like last week’s super-delayed plane, I could justifiably be properly pissed ’cause then on top of his no-show I wouldn’t even have seen my friends.

Half past six. With a decent dent in the bottle of bubbly I was getting ready to eat the whole damn cake by myself when I heard the garage door slowly crank up. Through the open door linking the kitchen to the garage I saw headlights shine in, then flash off as Dirk’s Golf pulled into its space.

I was happy! Okay, slightly pissed that he was so late without even his usual one-word text, but the happy pissed-ness brought on by bubbles made the other pissed-ness not so bad. I stuffed my phone into my pocket and quickly lit the vanilla candles on the coffee table, even though it wasn’t really dark enough for the candle routine. I decided to keep sitting on the couch (side-effects of pissed-ness being crossness and leglessness).

Wait, Kari, wait. Treat them mean, keep them keen. Doctor Lily’s Orders rang in my head so there was none of the usual rush-to-the-door, Hello-how-are-you-I-am-sooooo-glad-to-see- you thing that I can never stop myself from doing, even though I know Dirk is one of those slow-to-warm-up types.

Today was to be a new slow-to-warm-up record. He took about a year to get his things together, get out the car, and get through the door into the kitchen. Did the usual little duck in the doorway that tall people do. Marsh the cat was next to me as we saw the shiny blond head, but – funny that – didn’t wait to be pushed away, just fled. Guess it made sense.

Animals can feel storms coming way before anyone else knows.
“Hey, Kari,” he said softly. Not yet looking up. Not yet straightening up. Still putting bags down, hanging keys up.

Ignoring the cake right there. You know that crap about lightning bolts and thunderclaps when the guy and the girl look into each other’s eyes and you just know that even though they are angry they will love each other for ever? Usually it happens at the beginning of the movie. Well, today it seemed like forever before those blue eyes lifted enough to look into mine. And, yes, when his eyes clapped into mine there was thunder.

All over the kitchen floor.

Dirk’s puke got me immediately un-pissed and up off the couch.

“Oh shame, Dirkie, are you feeling bad? Did you eat something bad?”

I rushed to him to try to steer some of the waves into the sink.

Usually he is a silent and violent puker. He sweats and spasms and spews. Never a single sound. A silent sufferer, I always tease him about it when he is sick. On my way to him my bare feet felt soft warm bits that made me look down at the same time as I knew it would not be the best idea to look.

The grey tiles of the kitchen floor were like the beach at Eden when the tide is out. Bits of unidentifiable stuff stuck here, bits of what could be weird sea creatures, wet spots, dry spots.

But instead of sea, this smelled of sick and alcohol. I had never had this with Dirk before. Normally he is considerately sick and rushes behind a closed door. I had never actually seen him do a proper puke, never mind this drunken puke.

So I just stood with him hunched over the sink, my hand on his back while he pulled hard on my other arm, leaning over and holding on like I was a life raft. He kept heaving and heaving, and then came great big heavy sobs. It was weird.

From the neck down he looked completely normal. Black suit, Paul Smith tie, Montblanc cufflinks. But his face was red, scrunched, and there were gobs of puke and snot and tears splashed on his hand. Jesus, I remember thinking, this was hectic dronkverdriet, even for Dirk.

In my gut I knew there was something more.

“Dirkie, it’s okay. Don’t worry. Everyone has a little bit too much sometimes – maybe you just ate something bad also. It’s okay,” I tried in my best calm voice, all the while looking at the dirty mixing bowls in the sink and wishing I’d cleaned them and put them away earlier. Now there was puke sitting mixed in with the leftover cake batter.

I must have said It’s okay a hundred times.

Dirk sobbed and retched, and eventually slid down to sit flat in the grey slick, holding onto me so that we sat close in the wet and the stink. I watched him like a stranger; I had no idea what creature this was that had possessed the body of my husband. Crying crying crying.

The thunder was soft now.

I didn’t know what to do. I’m used to showing love with cake and hugs and words, but I had no idea how to help him or take care of him. Dirk is not that kind of guy. So I just sat until there was no more crying.

“Sjoe, Dirkie, that must have been one helluva party. You want water or something?” I said when it was quiet.

He covered his eyes with a wet stinky hand and rested his head against the bright yellow kitchen cupboards we had put in last year.

Just like that. Four little words and it was my own V-Day Ground Zero. V for VeryFuckingAwful. His lips moved. I heard more words, not all of them.

More words than that, I think, but I can’t be sure. It couldn’t be true. I could not think. I could not breathe. So I ran. I left Dirk in the stink and I didn’t look back.

I know. Not the most grown-up fucking response.

I should have stayed and raged and talked and screamed.

Found out all the things I now want to know so badly it feels like a crazy itch all over my body. An itch I just can’t reach.

But as my brain emptied onto the grey tiles next to Dirk’s guts, all I saw were my keys on the kitchen counter, and through the door to the garage was my little black Mini sitting next to his Golf. I don’t remember how I got that car out the garage, down the hill, and around the curve to Di’s house.

Thank God she also lives in Beach View Estate ’cause I don’t think security would’ve let me pass through at the gate.

Or maybe they would have. I guess they wouldn’t have seen the wet puke stuck on my jeans or the broken bits in my heart.

Or the zillion What the fucks! screaming silent in my head.

Purchase a copy of Being Kari from Raru.co.za