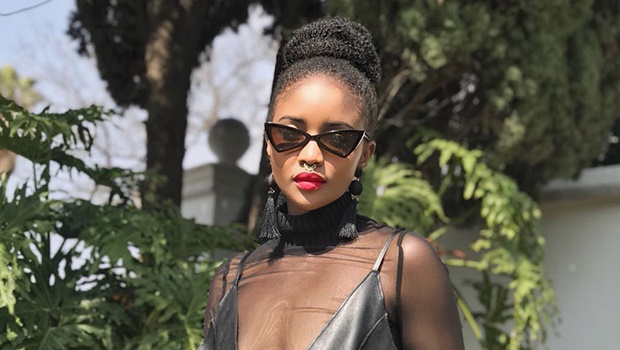 Supplied .
Lunathi recently joined the cast of The Queen and her character Benni is bound to wreak havoc on the show. The actress is not new to the small screen, having appeared on Isiziki and Ingozi.

You studied acting both here in South Africa and overseas. Where does your love for acting come from?

I grew up in church and we always used to perform. There were always musical competitions and sometimes we did miniature theatre shows, so performing became a norm for me and that’s where it all started. I went to Victoria Girls High School where I started doing theatre as well as music. I also travelled to Europe with the school choir. I knew at that time that that is exactly what I wanted to do and I’m passionate about it.

What was your reaction when you received the news on your new role on The Queen?

[Giggles] I cried! I became emotional because God knows that I’ve always wanted to showcase my talent. The only way you can grow within your talent is by doing it so to get this opportunity is amazing and to know that I’m going to be working with such amazing actors, with an amazing production – I’m bound to be challenged. I live for challenging myself within my art, I live for challenging characters so getting this role made me feel emotional, knowing that once again I have an even bigger opportunity to prove myself and to showcase my talent to the world.

What is it like to work with the Fergusons?

It means a lot to me because they are grounded individuals and they tell amazing stories. To be able to be on a platform like that and to be able to tell realistic and aesthetically beautiful stories is exciting

Tell us about your character

uBenni is a tomboy and lesbian. She grew up in unfavourable conditions – her dad was a drunkard and her mother was into drugs so as a child she was bounced around from one relative to another until she ended up in an orphanage. She became a rebel and tried to find ways to fend for herself in order to survive. She became a thief and did other dodgy stuff.  I cannot wait to found out where she’s going to end up b because right now she is in the beginning stages.

What do you enjoy most about your role?

I enjoy the fact that she is challenging, my role is not that different from the way I grew up in terms of being a tomboy but I’m not as hard-core as Benni is. I’m very sensitive. I’m an introvert so in order to play a character like Benni you need to be crazy; you need to get out of your shell. I like the stark contrast between me and her.

When you’re not on set, what do you get up to?

I watch a lot of shows on Netflix and I’m a gym freak! I go to the gym twice a day and I spend a lot time with my family.

How would you describe yourself in three words?

What values do you live by?

Whatever you do you must always come back home, always know where home is, and what you were taught at home. Do everything to your utmost best. Don’t be selfish and hurtful. I also live by gratitude, I don’t think you can ever be successful without being grateful for what you have. In order for you to receive more you need to understand gratitude. And prayer is very important as well.

“We’re all equal in this creative world, we’re equals. Never look at yourself as less than any other artist or performer, no matter how great they are because you don’t know what tomorrow might bring”. Hearing these words humbled me. There are people who are greater than I am and who are more talented so I just want to learn from them.

Do you have any future projects?

There are passion projects that I’m working on but besides that it’s just the norm of doing commercials and going to castings.

Catch The Queen on Mon-Fri at 21H00 on Mzansi Magic

More about mzansi magic| the queen