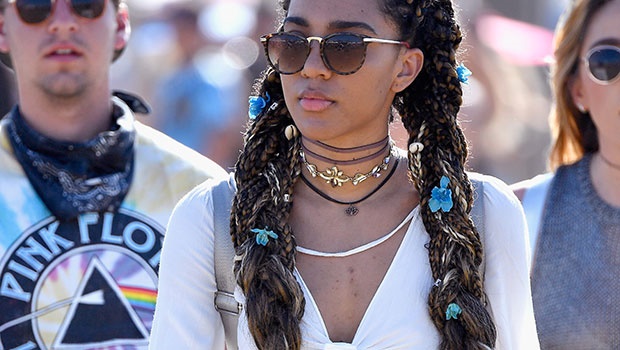 Credit: Getty Images
If you think going to a festival could be a little scary, try going on your own.

So, a while back my editor turns to me and asks if I want to go to Rocking The Daisies to check out the event, visit the W24 beauty truck and do some general coverage.

I’ve never been to a festival before (mostly because they can be quite costly), and I’ve always wanted to experience Daisies. So this is the perfect opportunity.

In the lead up to the festival, I'm a bundle of nerves and excitement. So I borrow a sleeping bag and tent from a friend, read up all the rules about glass and making an eco brick, etc on the Daisies website, and booked a seat on the bus for the Friday.

READ MORE: 5 fashion items you need for any festival

Trying to find my camping spot

After a mostly uneventful bus ride (I did have a nice conversation with the guy next to me), we get to Daisies. I miss the media tent as the bus arrives at the venue, which proves to be a bit of a hassle as I got my media band, but no one at the main entrance knows where I'm supposed to stay. I eventually contacted people from work and found out I was in Daisyland – which was not very close to the main entrance. So I trek all the way with all my bags (like 5!).

"Even though the wind picked up just as I started unpacking, 20 minutes later I had quite proudly set up the tent all by myself."

On the way, I meet a very nice guy and some friends of his who offer to take my bags to the Daisyland gate for me. When I get there, however, the security person says she has no idea what I'm talking about and calls a supervisor, who then points me to the media room instead of the media camping. By then, my new friends are gone and I have to walk 20 minutes all around the festival grounds only to get there and be told I am meant to be at Daisyland and shouldn’t have been sent away. Gaaaaah!

Needless to say, at this point I'm pretty fucking angry. I'm sweating, tired and in need of a drink. So I start the trek back to Daisyland.

At this point, I decline the security guy’s offer to help with setting up my tent. And, even though the wind picks up just as I start unpacking, 20 minutes later I had quite proudly set up the tent all by myself. I am woman, hear me roar! Or something like that. I did it! Picture: Carmen Williams

While I'm piling everything into the tent, one of the guys in a neighbouring tent introduces himself. We’ll call him Aidan.

After an afternoon of exploring the festival vibes I begin to feel overwhelmed and a little anxious. I have GAD, so when I get too anxious it can lead to a panic attack, which is not something you want to happen when you’re alone at a festival. I go back to my tent intending to hang out for a bit before getting something to eat and heading to one of the stages to dance.

"Then he offered me cocaine."

READ MORE: Yes, I have a mental illness and, no, I'm not making it up

But then, Aidan calls me over and says I should come for a drink in his tent. I think “why not?”, get the premix of gin and cranberry juice I had made in a 1.5L water bottle and walked over to his tent.

Inside, I sit on the edge of his air mattress while he insists on covering me with his duvet (um, weird. It was chilly, but still). We then start talking about our jobs, why we decided to come to Daisies, politics, race and relationships, etc.

Then he offers me cocaine.

“Do you do any powder?” And he isn’t talking about the Grandpa tablets you get in the sachets either.

I say no, I’ve never tried any before.

“There’s a first time for everything. You’re welcome to try some now.” I decline. “Well, I hope you don’t mind if I try some then?”

He proceeds to take out his driver’s license, cut the coke into three lines, takes out a R100 note from his wallet and snorts two lines. Perhaps he thinks I’ll be tempted by that last line he puts aside, but eventually he snorts it 10 minutes later - after it becomes clear that I'm not going to do coke with a random stranger. Then Aidan says: “let me give you a kiss” and before I can say anything he's kissing me. And then he coerces me into lying next to him where he begins to cuddle me. I don't know what to think. One moment I'm talking about privilege and the next this guy is trying to sleep with me!

I make the excuse of going to the bathroom – mostly to get away from him. But then I realise I left my phone in his tent and had to go back. Dammit!

Eventually, I decided to be honest and tell him I just wasn’t into it. He still tries his luck though and keeps touching me, but I say that I want to go dancing, grab my phone and leave.

I was really relieved to get out of there. He wasn’t aggressive and didn’t try to force anything, but I still felt really uncomfortable.

"I let my hoe side shine bright like a diamond."

After leaving Aidan’s tent, I take the last swig of my pre-made alcoholic mix, and realise (far too late) that I went through what was admittedly a VERY strong mixture of gin and juice VERY quickly.

I work my way to the front of Nu World Beat Club. While dancing with random people, I somehow find the guy and his friends who helped me with my bags earlier. We dance for a while. Then I start dancing with a random guy who I somehow end up making out with about 10 minutes later. Don’t ask me how, why, or even what his name was.

This isn’t something I’d normally do, but I figure, hey, it’s Daisies. So I let my hoe side shine bright like a diamond.

Then I lose my nameless makeout buddy in the crowd. So I go off to the bar and got something more to drink (don't judge me) before heading over to the Electronic Dome.

I have a rather funny, but completely embarrassing video I took of myself when I got to this stage. I’m very drunk, very much feeling myself and the music, and I'm making very weird faces. I will NOT be posting that video here.

"We somehow ended up dancing right at the front of the crowd, where at a later stage TJ tried to jump the barrier and go on stage."

At this point I'm dancing like a lunatic, making friends with random strangers. Then I bump into TJ. He's cute, but has absolutely no rhythm.

I start dancing with him and after a short while he looks at me and goes “Carmen, kiss me”, so I did.

We keep dancing and making out for what felt like ages before I got a really good look at him and think he’s probably younger than I first thought. I look at him, make eye contact and say “how old are you?” and get a defensive “why, does it matter?” in reply.

He eventually tells me that he’s 20 and seems a bit overly impressed with himself for making out with an ‘older woman’  (I turned 26 the Tuesday after Daisies).

We somehow end up dancing right at the front of the crowd, where at a later stage TJ tries to jump the barrier and go on stage, but (perhaps, luckily) is a little too uncoordinated to do so.

Eventually, he decides to leave as I'm talking to other people around me and not giving him all my attention. He gives me one last kiss before he leaves, says “Don’t forget me in the morning, okay?” as if we had just had some epic love story and is gone when I look around.

I keep on dancing with random people at that stage for what seemed like another hour at least. Then I decide to check out what was happening at the main stage. I can't really remember, but I think Mac Miller was playing.

I wander over to the food court, get something to eat (I think it was a burrito), and then had to remember where the hell my torch was so I could figure out how to get back to my tent. I eventually get back around 3AM, eat my burrito, get into my sleeping bag and fall into a drunken sleep.

So what did I learn?

All in all, if you want to go to a festival, but don’t have anyone to go with or are only going to be joined by someone the next day (like I was), then I say, go for it. If you’re open to talking to everyone and meeting new people, you could end up having the time of your life.

Just remember to stay safe and take the proper precautions. By that, I mean, make sure to mix your own alcohol and NEVER take drinks from strangers. DON'T do drugs, especially with random people. ALWAYS make sure someone knows where you are and that you are in an area where you can be seen by security and no one can take advantage of you.

Festivals are meant to be fun, so don't let someone ruin yours.

Oh, and for the love of butt fat, remember to take a mattress with you, lying on the ground in just your sleeping bag will leave you with very sore hips and thighs. Trust me.

Do you have any really interesting festival stories to tell? Send us an email and tell us all about it.

More about rocking the daisies| festivals