YOU'RE READING The low-down on Muslim weddings: Part 2

The low-down on Muslim weddings: Part 2 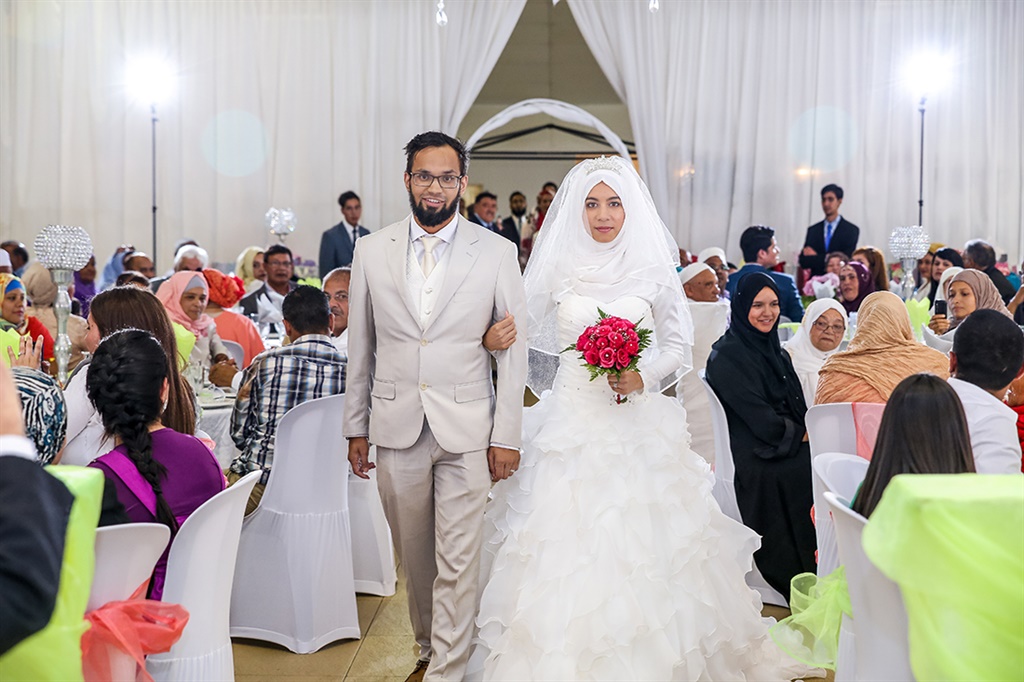 Credit: Munier Johaardien Photography.
The second entry of a three part series giving you all the details on the nuptials of South African Muslim couples.

If you missed it, read Part 1 here.

Once the deal is sealed and the marriage has been made official, it’s time to celebrate! Like many other cultures, the wedding reception gives the Muslim couple and their guests a chance to let their hair down after the formalities have been settled.

Nevertheless, the function can be quite different to that of non-Muslims. This part of our Muslim weddings series shows you how…

A Muslim wedding reception is also known as a walima. Unlike the ceremony or nikkah, this is the time when the male and female guests come together - and consequently, feverish efforts are made to establish future wedding prospects. As a former victim of such efforts, I can say that it either results in disappointment (or complete speechlessness) at the sight of potential suitors, or smirks at aunties who are hopeless matchmakers, yet consider themselves pros.

Moving on to what really matters - the party. Indian Muslim couples host one reception, whereas Cape Malay Muslim couples generally hold two receptions with one hosted by each family. As said before, the Cape Malays don’t make such a fuss of pre-wedding events, but once the knot is tied, they sure do throw a party - I mean, two parties. It’s perhaps normal for you to sit down to a dinner whenever you’re at a wedding reception. In the Muslim community, you do find that more couples are beginning to opt for dinner receptions, but the norm is a lunch reception.

Unless of course it’s a Cape Malay wedding, in which case there’d be both a lunch and dinner reception.

You may also be used to taking a drive out to an elegant wine estate, quaint farm or snazzy hotel en route to your friends’ wedding receptions. For Muslims however, this is seldom expected. When it comes to reception venues, they thrive on convenience and familiarity, and thus end up picking a local hall as their reception venue- possibly down the road from their cousin’s house.

Welcome! Please, have a seat.

As you arrive at an Indian reception venue, the air is alive with the latest Bollywood hits, and chatter in near-extinct dialects that you didn’t know existed. At a Cape Malay reception, this is replaced with your mom’s favourite Golden Oldies, along with high-pitched shrieks of “Salaam! Hoefa die tietie?”

The tables are laid with platters of savoury nibbles, like half-moons, samosas and mini pizzas, as starters. At Indian Muslim weddings, a specialty called soji, is sometimes a starter. I don’t eat soji, so I usually try to grab a couple of half-moons and mini pizzas before anyone else takes them. Even if there’s no soji, I aim to (subtly) snatch them first anyway. What? I can’t help it if they’re good!

The couple is treated like stars of a theatre production as they are seated in the centre of the stage.

You’ll notice that once the platters are about half empty, the MC asks everyone to take their seats because the bridal party is about to make their entrance. Cue instrumental versions of yet more Bollywood hits, as you watch toddlers walking down a long carpet in the middle of the hall. Their moms are usually standing on the edge of the carpet, to stay out of the photographer’s way, coaxing them to hold the boy’s hand without throwing a tantrum.

Sometimes, the mom’s attempts are to no avail, as the toddlers steal the show.

The groom, occasionally on his mother’s arm, then walks in, but stops in the middle of the carpet. Almost as nervously as he would have been at an altar, the groom awaits his bride...

After a few ruffles of her train and straightening her veil, the big moment arrives. The bride and her father make their way down the carpet to where the groom is standing. Once he and the groom, typically quite sternly, shake hands, the groom lifts the bride’s veil and off they walk towards the stage. When I say stage, I mean that quite literally. The couple is treated like stars of a theatre production as they are seated at the centre of the stage on a chaise lounge, surrounded by paige boys and flower girls on small couches. Tall flower arrangements are placed on either side of the seating and draped fabric, which at a supposedly fancy wedding would be covered with strings of fairy lights, creates a backdrop for the stage.

The next part of the reception doesn’t always feel like a celebration. This is the part where prayers and speeches are made, launching with a prayer in remembrance of God, Allah, and readings from the holy book, the Quran. Although this is meaningful, it can also feel a bit daunting.

More often than not, a Muslim leader, or imam, gives a talk that is supposed to advise the couple on marriage. Yet, few manage to do this effectively and succinctly. Some of them take their own sweet time preaching on whatever comes to mind, while others convey philosophical anecdotes about talking chickens. The latter could lighten the mood, but if not, a speech by a sibling or friend of the couple usually does.

No, the classic bestman’s speech, with a reputation for making the groom’s cheeks turn red, is not a popular Muslim wedding custom. However, one of my friend’s sisters didn’t neglect to mention the bride’s undying love of KFC, whilst another took the opportunity to “thank” her big sister for bequeathing her all of her cupboard space.

That was not part of the vote of thanks, which is another item on the reception agenda. At this point of the program, guests begin to feel relieved (although most try not to show it), because they know that it’s almost time to eat again, and that the only thing left to do is say a closing prayer. There won’t be any wine at the wedding, but as at many other weddings, anything to do with food is eagerly anticipated and always met with delight.

Depending on the time, the guests may have to wait a little bit longer before devouring their highly lusted-after meal.

If one of Muslims’ five compulsory prayers, salaah, falls during the time of the reception, there will be a short break to perform prayers. The men basically always pray, but the women normally stay behind. As the men start re-entering the hall after praying, the waitrons start carrying big bowls of food to the tables.

Why in big bowls, you ask? At Muslim weddings, food is served “family style”. This means that instead of each guest being given an individually-plated meal, bowls are passed from one guest to another, for each guest to dish their share. This can create intimacy between the guests, which sounds lovely and all, but it does have its downsides.

Even as a spice-averse eater, I still savour the taste of butter chicken.

Because certain Muslims eat with their bare hands rather than cutlery, the dishing spoon could be covered with food by the time it reaches you- not amusing. Oh, and God forbid food spills on you. I don’t even want to think about it…

But if you’re a fan of Eastern food, the menu may take your mind off these potential glitches.

The traditional delicacies, biryani and akhni, are well-loved at both Indian and Cape Malay weddings. So much so, that it’s become standard for the dish to be sent back to the kitchen for a refill- at least twice. Another firm favourite is roti, fried flat bread that reminds me of pancakes, eaten with mutton curry or the even more sought-after butter chicken. I must admit that even as a spice-averse eater, I still savour the taste of butter chicken now and then.

When the uncles begin to loosen their belts and hands have been wiped with refresher towels, the tables are cleared so that tea and cake can be served. If you’re lucky, they may serve brownies and ice cream too. By this time, you might expect to have drunk a few glasses of champagne or downed a couple of beers as the party really gets started. Things are somewhat different at Muslim weddings. Actually a lot different…

In certain cases, the entire stage is packed with so many guests, that it looks like they’re taking an annual class photo.

Seeing as Muslims are non-drinkers, you don’t find any intoxicated aunties trying to climb on the table, or catch your brother throwing up in a pot plant. Thank heavens for that. I shudder to think how that would turn out. You also don’t see anyone busting a few moves on the dance floor since Muslims of the opposite sex cannot dance together.

What you do see are groups of guests lining up in front of the stage, most of whom are only too enthusiastic to be taking a picture with the bride and groom. In certain cases, the entire stage is packed with so many guests, that it looks like they’re taking an annual class photo. It’s a struggle to see their faces in the photograph, which is unlikely to ever be framed. Nonetheless, some guests are just so insistent, particularly those aunties that you haven’t seen in like, 5 years. I feel so sorry for the poor couple who have to try their best to smile even though they’re most likely exhausted. Luckily for them, these group shots are a signal that the party’s almost over, as guests slowly but surely loiter out of the hall. Some of the ladies leave with a bunch of flowers in hand, taken from the tables by invitation from the MC.

Take a look at Part 3, the final part of The low-down on Muslim weddings series…

7 items every bride should have in her emergency kit

3 conversations you should have with your bridal entourage

I like piña coladas and gettin' caught in the rain and the feel of the ocean and the taste of champagne. I like to think that I'm a bit of a geek and not a...
Confirm profile
Sign up for the hottest trends, beauty tips and more. Sign Up