YOU'RE READING How camp was the Met Gala? Not very

How camp was the Met Gala? Not very The Met Gala is an annual fundraising event for the Metropolitan Museum of Art’s Costume Institute where fashion and celebrity often collide. It always manages to raise eyebrows and this years’ theme, “Camp: Notes on Fashion,” has generated much debate. A common question many fashionistas and cultural critics are asking of each outfit is “ …but is it camp?”

This kind of overly analytical and far too serious commentary on a sensibility that is supposed to mock such things is intriguing but not surprising given how the concept of camp has evolved. In 1964, author Susan Sontag penned perhaps her most influential essay, Notes on Camp. It was one of the first attempts to try to pin down camp’s qualities and parameters. It’s clear why she chose to write some notes rather than a formal essay; because camp is a sensibility or a way of perceiving the world, it is quite difficult to treat systematically. In fact, Sontag would say that it often defies the very idea of systematisation.

For Sontag, camp is “the love of the exaggerated, the ‘off,’ of things-being-what-they-are-not”, and though it is not merely visual, it has often been expressed in the visual styles of décor, architecture, cinema and fashion.

READ MORE: WATCH: This is what Kim Kardashian West sacrificed for that incredible Met Gala gown

Certain aspects of Art Nouveau, old Flash Gordon comics, women’s clothes of the 1920s like feather boas and fringed garments, celebrity dandies and “sissies” like Oscar Wilde and Paul Lynde, “overwrought” performances by classic Hollywood actresses such as Bette Davis and Judy Garland and so on. Key to camp is a sense of affectation, of style over substance. But equally important is the way one looks at those things, how one appreciates affectation.

Many of the gowns and costumes at this year’s Met Gala attempt to capture the essence of camp, and in trying to do so miss the point of camp entirely. There is nothing discernibly camp about Jared Leto carrying around a replica of his own head. Quirky and strange? Maybe. But nowhere near camp. Another interesting example was Celine Dion, who wore a glittering tribute to Judy Garland and the Ziegfield Follies, designed by Oscar de la Renta. While inspired by camp figures, it is not the outfit here that is camp but rather the person wearing it. Dion is arguably a contemporary camp icon, and she would be camp regardless of what she wore. This is because her celebrity image owes more to her overly emotional songs and the way in which she performs them, her goofy persona, and the heightened emotion of some of her public statements.

People with a camp appreciation of Celine Dion enjoy her ironically, finding the style of her public personality thoroughly entertaining. Such appreciators would probably also love the fact that she apparently initially thought the theme for this year’s gala was “camping.” In nature. Bless her. Other guests such as Billy Porter approached the camp sensibility much more accurately by incorporating outrageous pomp and performance to their attendances.

Porter came dressed like some kind of Egyptian goddess, carried in on a litter by six nubile, shirtless men. While this adds a certain spectacle, it was, like every other guest’s appearance, a designed, rehearsed happening. 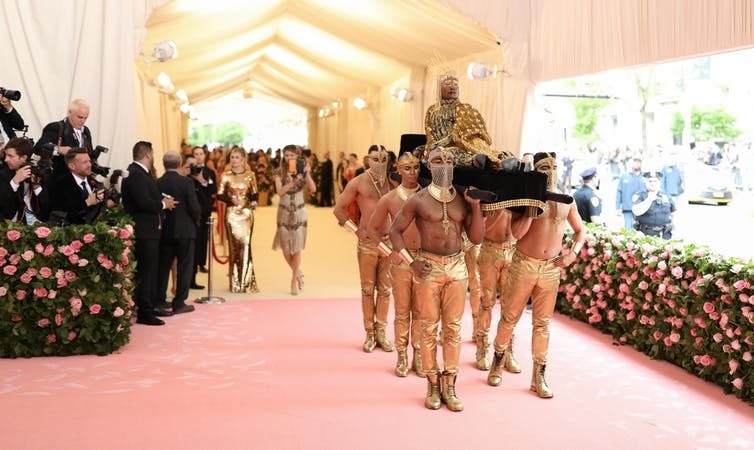 Billy Porter’s arrival at the Met Gala was an ornate spectacle. Andres Otero/Wenn.com/AAP
The Conversation

For Sontag and many thinkers who came after her, there really are two ways of “doing” camp. One is the “naïve camp” and the other is “conscious camp.” Naïve camp is the Judy Garland kind of camp. Garland did not intend to be a gay icon, but she became one because her earnest, overwrought performances invited a large portion of queer people to view her as a camp figure. “Conscious camp” is what was on display at the Met Gala this year. Take Lady Gaga’s “Russian doll” of dresses, each layer referencing old Hollywood glamour to an over the top degree. An oversized version of Marilyn Monroe’s dress in Gentlemen Prefer Blondes is removed and beneath it is a sleeker black, femme fatale number, followed by another reveal of a more realistically proportioned pink dress. Gaga is well-versed in queer and pop cultural aesthetics, and there was a fun narrative here, but its barrage of old Hollywood references don’t necessarily make it camp.

Contrast this with Amber Valletta’s rather simple, but effective costume: she looks like she is wearing a giant, green loofa, and in most of the photos looks to be taking herself way too seriously. That’s the sort of camp Sontag might enjoy.

The best kind of camp is the kind that doesn’t know it is camp. Which is just another way of saying you can’t really design and wear your way into the camp sensibility.