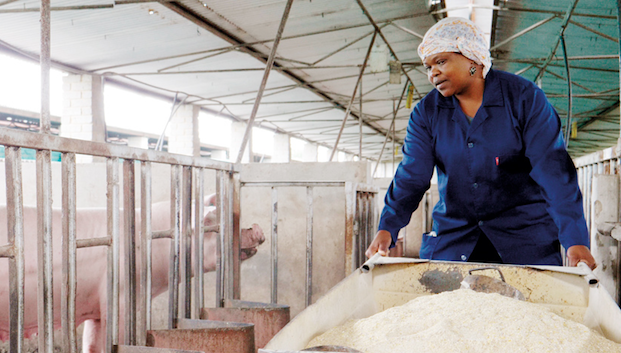 .
Anna Phosa is bringing home the bacon after expanding her small holding with a business loan from Absa

Do you dream of becoming an entrepreneur? Anna Phosa was always a go-getter and proved it’s never too late to reach your goals and exceed even your own expectations.

From humble beginnings, born in the Free State and raised by a single mother of seven children, Anna rose against adversity and today she’s the award-winning owner and managing director of her family-run business, Dreamland Piggery & Abattoir – with Pick n Pay as her biggest client.

This is a truly inspiring story that shows anything is possible, especially with Absa by your side. Inspired by her mother’s determination, Anna became business-savvy from a young age. Selling goods and doing odd jobs while still completing school. “To raise funds, on weekends I would sell boiled eggs or peanuts – anything to get an extra 50 cent.”

She also helped at home, which is where her affinity for farming began, but she only got involved with agriculture later in life. Today Anna is a fully fledged “agripreneur” – an entrepreneur in the agricultural sector. “We had a vegetable garden to supplement our household. At 11 I started helping out – at 13 I started going with my mom who worked as a domestic worker to help her.” The 54-year-old entrepreneur was not able to study further after completing high school, but she continued to persevere, working to support her mother. She later got married at 21 and had three children who are now all graduates.

“My mom was my role model. To see how strong she was, handling all the kids, trying to get us to school. It inspired me, and I knew I would do anything to make sure my kids get an education and study further.” Anna’s first official job was at Shoprite in 1989, where she worked as a cashier. She was married and living in Soweto. “That was my first and last job working for a boss,” Anna says triumphantly.

Her husband opened a hardware business in 1994 and she helped him with it. Until an opportunity presented itself in 2004. A small piece of agricultural land was available in the Vaal and they bought it with the family’s savings and started a pig farm. Anna’s networking skills helped a lot. She and her husband spoke to nearby farmers in the community and came across an old farmer, Mr Mohlabi, who introduced them to pig farming. Anna and her husband bought pigs from him and started the small holding.

“He was one of those people doing pig farming correctly.” Anna empowered herself by doing training to further herself in her passion project and joined a group of women who were in partnership with the Agricultural Research Council, an initiative of the department of agriculture. “When we started farming small-scale, we never even thought it would become a huge business. “Passion is what made me go into farming. I had to learn afterwards from anybody and everybody,” Anna says. But she didn’t simply just fall into the success as “there were many challenges as a small-scale farmer”. Of which skills, funding and wanting to expand were the main factors.

“They [funders] would see farming as high risk – but we overcame the challenges and continued to push through.” Anna hails Absa for giving her business that much-needed financial assistance. “We were encouraged by the availability of the market and accessibility to land. Absa provided a loan to help fund bigger land.”

The family moved 40km away from their first farm and today it’s a family-run business. Anna has a 318-hectare farm, a 300-sow unit pig production, maize production and a slaughterhouse in the Vanderbijlpark CBD – supplying meat to Pick n Pay, Spar and Massart. They breed and raise pigs, use the maize to feed them and then take them to market to sell. They provide 300 pigs per week, a marked increase from the initial 100 sows she was able to provide at first – even more inspiring when considering her humble beginnings of starting her business with three pigs.

Anna’s husband assists and does maintenance, their eldest daughter manages the piggery and their younger son is also showing interest in the business. “If myself or my husband retire, we have a good support system to take over,” Anna says with pride. Anna has since received many accolades, including the female farmer of the year award in 2006 by the department of the agriculture.

Anna credits the media exposure from her award, which helped her get recognised even more and helped big companies see what she offered. “You don’t even realise people can award you for what you do every day. If you prove yourself, somebody who knows somebody will take note,” Anna adds. The inspiring businesswoman continues to give back and welcomes more women and upand-coming farmers, sharing her skills and knowledge.

“Agriculture does not have competition because we’ve got to feed a nation.” On excelling as a woman in farming, she adds, “Being a woman in a man’s industry is hard. As time goes on they accept you, but it’s hard at first. You must prove yourself. “You have to be hardworking and overcome the fear. The thing that holds us women back is fear. Go out and network, network, network.” Anna is also on the development committee of the South African Pork Producers’ Organisation (SAPPO).

She also gives small farmers a voice, “They need to know the challenges we face.” Issues like funding continue to be a factor for small business owners. But Anna has shared her new business plan and hopes to receive more funding and to expand her business. Start small. Think big with Absa On her relationship with Absa, Anna adds, “I advise people to go to Absa for business assistance – they are flexible to work with.”

Absa offers tailored business accounts to choose from to suit your needs – while giving you the financial kickstart you need to get on your way. “A very big role whereas you compare to previous years, you’d knock on every door to prove you should have enough funding. Absa engaged with the market and funders. “The kind of help they offer is precious to the disadvantaged. They have an enterprise development sector and they try to help businesses.” For more information on opening a business account online, call Absa on 0861-000-734

Dreamland Piggery is in a committed relationship with Absa Business Banking.

Dreamland Piggery understands first-hand just how much Absa can help a small-scale farmer grow into a big enterprise.

With flexible products, why don’t you start a relationship with Absa Business Banking?